The name "Tangela" is a corrupted form of the word "tangle", which is both what it appears visually and what its vines often do to opponents. Its Japanese name comes from mojamoja (もじゃもじゃ, mojamoja), which refers to shagginess or tousledness.

In the beta version of the English translation, Tangela was originally going to be called "Meduza", a reference to how its vines resemble hair made of serpents, much like the mythical creature that served as its namesake, Medusa.

Tangela, appears to be no more than a matted pile of blue seaweed-like vines tangled together, held up by a pair of legs, with only two eyes that peer out of the mass of tangled vines. However this Pokémon is able to use its vines to bind or whip its foes. When this Pokémon walks, the matted bunch of vines that surround it moves. The constantly jiggling vines unnerve enemies. It's vines can entangle anything and they are ticklish. When in battle, it constantly moves the vines that cover its body to annoy its opponent.

Tangela is rather common. In Pokémon Red, Blue, FireRed and LeafGreen, Tangela can be obtained in Route 21, just south of Pallet Town, as well as in a trade for Venonat in the Pokémon Lab on Cinnabar Island. In the last two games, Tangela is additionally found on Treasure Beach. In the first generation, it was the only pure Grass Pokemon. In Pokémon Yellow Tangela is found in the Safari Zone. In Pokémon Gold, Silver and Crystal, Tangela is found in Routes 21, 28, 44 and in the grass around Mount Silver. In Pokemon Diamond and Pearl it can be found as a random daily swarming pokemon on the top of Mt. Coronet once the national dex is obtained. Tangela can also be snagged in Pokémon XD: Gale of Darkness.

Tangela has pretty good stats, excelling in Defense and Special Attack. Its Special Defense is low, however. Tangela can learn many disrupting and status-inducing moves. It can also learn some powerful attacks, mainly through Technical Machines (TMs).

A player can also take advantage of Tangela's Chlorophyll ability and use Sunny Day, which will increase Tangela's speed, double the healing power of its Synthesis move and allow it to use the Solarbeam attack consecutively. However, since Sunny Day also doubles the power of Fire-type attacks against which Tangela is already weak as it is, this strategy should be employed with caution.

In Pokémon Diamond and Pearl, Tangela can evolve into a new Pokémon called Tangrowth. This happens when Tangela levels up after learning the move Ancientpower.

Tangela has made three major appearances. Gym Leader Erika used one against Ash's Pokémon in episode #26 (Pokémon Scent-sation). In Episode #227 (For Ho-Oh the bell tolls) after Team Rocket steals a set of bells, Tangela fight to protect them alongside other bug pokemon before Suicune restores order and calms them down. In episode #341 (Gulpin it down), a police officer used a Tangela,along with Parasect and Meganium, against some troublesome Gulpin, despite Tangela's type disadvantage against the Poison-type Pokémon.

In one episode, Team Rocket was trying to get some Aipom tears for a special potion. Unfortunately, the Aipom was refusing to cooperate. Afer a dramatic preformance by Jessie and threats from Meowth, James tried "good old-fashioned humour". He showed the Aipom a picture of a tangela, bug-eyed, at a kitchen table, with a plate of noodles in front of him. The caption said: "When a Tangela eats noodles".

Like her counterparts in other media, Erika of Pokémon Special has a Tangela in her arsenal. 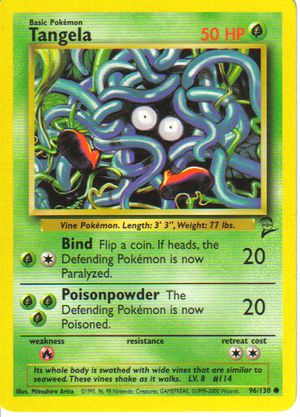 Tangela, for a first-generation Pokémon, has appeared only occasionally in the Trading Card Game. It is Basic and Grass-type in each appearance: