Tauros's name is derived from the ancient Greek word for 'bull' (see also Taurus). Its Japanese name may be a portmanteau of ken (剣, ken) for "sword" and "taurus", although the term "Kentauros" can also refer to centaurs.

Tauros takes on the appearance of a brown-furred bull with a thick brown mane, three tails, and a set of three pearl-like growths adorning its forehead. It only exists as a male, with Miltank presumably being its female counterpart. It has 2 long, sharp horns jutting out of the side of its head. There is some confusion about Tauros' tail; In FireRed and LeafGreen, it is silver, while in Ruby, Sapphire, and Emerald it is brown.

Tauros is a diurnal, herbivorous Pokémon that has long been famous for its violent urges and rowdy, aggressive disposition in general, as supplied by a tremendous amount of natural stamina. Any given Tauros finds it impossible to keep up its spirits in life without near-constant rampaging. It always tries to find opponent Pokémon to battle outright to serve this purpose, but if it is alone, it will instead concentrate on charging at and knocking down thick trees to calm itself.

Herds of this Pokémon under observation demonstrate a hierarchy system where the strongest member leads. Tauros in these herds fight each other for the sake of proving this important element of strength by locking horns and struggling until one succumbs from stamina loss. The member that has proven itself strong enough to gain the role of protector takes pride in its battle-scarred horns, which measure its social standing. Tauros are hunted in the wild for their horns and meat.

Tauros has a special habit that specifically affects its ability to battle, both in the wild and in trainer-directed Pokémon battles: It whips itself with its three long snapping tails. When it targets an enemy, it heightens its will to battle by whipping its own backside with its tails before charging at full speed. Here it often demonstrates an interesting disability: While charging, it can only charge in a straight line, unable to change its direction even slightly if the opponent Pokémon is wily enough to simply step out of the way (compare with Linoone).

This act of whipping itself with its tails can also serve a second purpose if the Tauros is of a high measure in social standings; it can issue commands to any Pokémon near it by the rhythm of its hits.

In the first generation of Pokémon games (Red, Blue, and Yellow), Tauros could only be found by paying entrance into the Safari Zone. In Gold, Silver and Crystal, it can be found on routes 38 and 39, in the morning and daytime in Crystal and all day otherwise. In all instances, it is rather rare to encounter a Tauros. Also in Pokémon XD one could be snagged from Cipher Grand Master Greevil. In Pokémon XD, Tauros you catch is at level 45 and has the attacks, Shadow Rush, Shadow Storm, Shadow Mist and Shadow Blitz.

Tauros is a strong frontal physical battler with very high speed, high attack, and high defense, offset by average special defense and very low special attack. Although it has a very powerful attack in Return (if treated properly), it learns few other physical attacks and so is rather limited. It has a large elemental movepool, but cannot use it very well due to its low Special Attack stat. It knows the ability Intimidate as well. Also, as of Pokémon Diamond and Pearl, it gets an Ability called Anger Nerve which Increases Tauros' Attack when it is hit by a Critical Hit.

Currently, Tauros is able to be bred with Miltank due to their identical breeding types, though the baby Pokémon will always be a Miltank. This is due to the fact that all Tauros are male. The only way to get a baby Tauros is to breed one with a Ditto.

In the banned episode "Legend of Dratini" Ash finds himself in the Safari Zone where he uses his Thirty Safari Balls on a herd of thirty Tauros. Brock also catches Tauros but they are not seen in the later episodes.

Ash used one of his Tauros in the Orange Islands, in which it battled a Gengar, and won against a Venusaur, but was later beaten by a Dragonite. He used another one, or the same one, in the Johto League, but was defeated by Gary's Nidoqueen with its powerful hyper beam attack. He also used one to battle a Frontier Brain, Anabel, but it lost against Anabel's Alakazam. On the next episode though, Ash had a rematch and Tauros tied against Anabel's Metagross.

In another episode, the group was travelling to Goldenrod City when they came by a town that was celebrating some sort of festival, with chances to battle and trade -- and an event paralleling the San Fermín festival and the Running of the Bulls at Pamplona, Spain.

In the first Pokémon movie, there is a short scene (during Mewtwo's training sessions for Giovanni) where Mewtwo is confronted by a whole herd of Tauros. To no one's surprise, Mewtwo easily defeats them with its Psychic powers, summoning a cyclone to literally sweep them off their feet, allowing Rocket Grunts to capture them.

Like Gyarados and Charizard, instead of saying its name, Tauros roars and bellows like a real bull.

In Pokémon Special Tauros was used as a mount by members of Team Rocket. 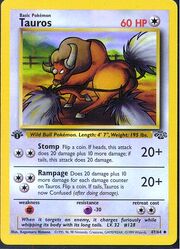 Tauros, as seen in the Pokémon Trading Card Game

Tauros has appeared all the following times in the card game, as a Basic Colorless Pokémon each time:

Almost all of them have the "Take Down" or "Rampage" attack, mostly having attacks that are self-damaging. In addition, Tauros has also appeared in the Vending Machine series and as another promotional card.