Teenage Mutant Ninja Turtles, released as Teenage Mutant Hero Turtles in Europe, is a side-scrolling beat-'em-up released by Konami as a coin-operated video game in 1989. It is based on the first Teenage Mutant Ninja Turtles animated series which began airing in the fall of 1987. The original coin-operated game was distributed to the arcades in two variants: a standard 2-player version that allowed either player to choose their character and a deluxe 4-player version with each player controlling a different character. Home versions of the game were released for various platforms. 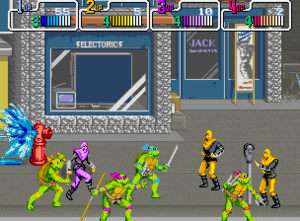 Screenshot of the second stage of the arcade version. 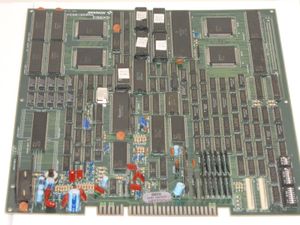 The player chooses from one of the four Ninja Turtles: Leonardo, Michelangelo, Donatello, and Raphael. After Shredder kidnaps the turtles' friend April O'Neil and their mentor Splinter, they must give chase, save their comrades, and defeat the evil Shredder. Up to four players (two in some versions) can take control of any of the turtles. Donatello has slower attacks but a longer range, Michaelangelo and Raphael have fast attacks but a short range, and Leonardo is a well-rounded Turtle with average range and speed.

The controls are fairly straightforward. The eight-way joystick controls the movements of the Turtle, the jump button makes them jump and the attack button makes them hit in front of them using their weapon. In addition to this, some combinations are possible. The Turtles can throw Foot soldiers overhead, and by pressing the jump and attack buttons, a special attack is performed. Raphael rolls along the ground and finishes with a kick, while the other Turtles do a jump attack with their weapons. In the attract mode, the game showed the first part of the cartoon opening, along with a portion of the Teenage Mutant Ninja Turtles theme song.

The majority of the enemies the Turtles must face are the Foot Soldiers. They wear a different colored uniform depending on what weapon they have. The purple-clad Foot Soldiers also have the ability to hold the Turtles from behind, leaving them open to attack by the other Foot soldiers. The bosses in the game includes Bebop and Rocksteady (individually and together), Baxter Stockman, Lieutenant Granitor, General Traag, Krang, and Shredder himself. 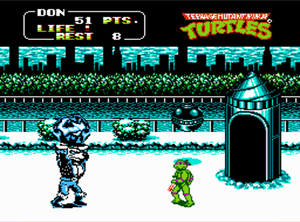 The Snowfield level added to the NES port.

This game was ported to the NES in 1990 under the title Teenage Mutant Ninja Turtles II: The Arcade Game, distinguishing it from the previously released Teenage Mutant Ninja Turtles video game for the NES. The Family Computer version in Japan retained the original title since the first game was released under a different title in Japan. The NES version includes two new levels (the first part of Scene 3 and all of Scene 6), which feature new enemy characters, including two new bosses: Tora (a snow wolf like alien) and Shogun Warrior (a robot alien samurai), both characters created for the game. Most of the original stages from the arcade version were extended as well and the second half of Scene 3, the parking garage stage, replaces the arcade version's end battle with Bebop and Rocksteady with a battle against the mutated fly form of Baxter Stockman.

This is one of the first ever home video games to feature product placement advertising in the game itself—Pizza Hut logos to be exact. The Game's manual also came with Pizza Hut coupons.

The computer ports of the arcade game released by Image Works in 1992 for the ZX Spectrum, Amiga, Amstrad CPC, Atari ST, PC and Commodore 64. The title was changed to Teenage Mutant Hero Turtles: The Coin Op (Hero being the re-branding of the license in Europe due to censorship issues) and lacked the extra stages and bosses from the NES game.

An Xbox Live Arcade version of the game was released under the name TMNT 1989 Classic Arcade on March 14, 2007, published by Ubisoft and ported by Digital Eclipse. Like other classic arcade games on the Xbox 360 platform, portions of the original arcade game are emulated with network code and other new features added. Players can earn achievements as well as play 2-4 player co-op (both online and offline). Certain aspects, such as the character select screen, were based on images from the 2007 movie.

The arcade version of Ninja Turtles is included as a hidden bonus game in Teenage Mutant Ninja Turtles 2: Battle Nexus for the PlayStation 2, Xbox, and GameCube. The version featured in the game is a port of the original arcade version, but with altered music and most of the voice clips edited out.