Tekken 6 is the sixth installment in the Tekken series. The game features more characters than any game so far, with over 40 fighters. The game introduces over five new gameplay elements to the series, while all features from Tekken 5 and Tekken 5: Dark Resurrection are in the game. First new element to the gameplay is called Bound. After the opponent has been slammed from the air to the ground(with a attack that has such propery), the opponent bounces on the floor, which makes possible even further combos. Players cannot tech out of this. The second one is called Rage mode. When player's health is on very low(approximately 15%), the player gets glowing fists(red by default), marking the Rage mode. In this mode the player deals approximately 1.1 more damage than he/she normally would. Third and fourth elements are floor breaks and wall breaks. In some stages it is possible to break through certain part of a stage(e.g. glass). Usually this is triggered by launching the opponent to the air and slamming him/her down to the floor break-area. The opponent bounds after players land. Some stages have walls, where the player can strike the opponent through. The opponent doesn't get bounded from this one. The fifth new addition is called Item Move. This is completely optional, but can aid help in battle. Players need to customise certain item(s) in order to perform this move. They often referred as hard to pull off, and have some humorous style. Some of these Item Moves can do some damage, e.g. Bryan Fury's shotgun or minigun. This is the first Tekken game since Tekken 2 to have Sub-Boss and Final Boss images. Jin Kazama is the Sub-Boss and Azazel is the Final Boss. There is also a Mini-Boss called Nancy-MI847J. It appears right before Jin Kazama and no matter whether the player wins or loses, he/she will advance to the next stage. Winning Nancy-MI847J gives the player money.

The director of the game Katsuhiro Harada has stated that there will be Online play.

The game introdcuded for new characters, Leo Kliesen, a German, whose mother died during the conflict of Jin Kazama. Her gender was very controversy, until Leo was confirmed to be female. Zafina is the defender of a temple that is located in what seems to be Egypt. Her nationality is officially stated as Unknown. Third newcomer is Miguel Caballero Rojo, is Spanish brawler. He found his sister dead from her wedding, middle of the fire. Miguel saw Mishima Zaibatsu's air forces, whom Jin Kazama owns, so he decides to enter The King of Iron Fist Tournament 6 to revenge Jin what he did to Miguel's sister. The fourth newcomer is Bob. He is a fat man, but wanted to get more weight while retaining his good speed.

There are thirteen stages in Tekken 6: 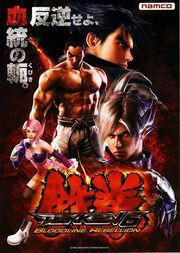 On late Autumn/early Winter it was confirmed that Tekken 6 would gain an upgrade similar to Tekken 5: Dark Resurrection. The main reason for the upgrade is an unbalanced character roster. Some of them were too powerful(e.g. Bob) and some of theme were too weak(e.g. Ganryu). Damages caused from Rage mode, combos and wall combos have been reduced to balance the gameplay. The upgrade got two new characters and six more stages, which makes up 21 stages in total for the game. Tekken 6: Bloodline Rebellion will take place on home console versions and a handheld version of Tekken 6.

On April 28, 2009, it was confirmed on IGN/SD Tekken/Tekken Zaibtasu that Tekken 6 will be coming to the PlayStation Portable console. It will be released alongside the PlayStation 3 and Xbox 360 versions. It will contain additional stages, content items, and an ad-hoc multiplayer mode using "original" and "fan favorite" characters. It will also have a "Ghost" Infrastructure mode, to allow players to upload his or her character data, as well as download the data of other players. This version will include all of the updates made in Bloodline Rebellion, as well. Currently, nothing else is known about this version.

Logo for PSP version of Tekken 6.

Two more new characters have been to appear in the console version of Tekken 6, which makes up six new characters. Lars Alexandersson is former Tekken Force officer and is loyal to Jin Kazama. Alisa Bosconovitch is a robot made by Dr. Bosconovitch, before the events of Tekken 3.