Temporal is a freeware videogame featuring platform and puzzle elements in a futuristic setting with time travel mechanics. The game was developed by Oren Bartal using the Allegro library and originally released on October 2008.

The game had a number of updates with the last one, version 1.11, adding a new Ticks collection mode as a competitive factor for the small number of users actively competing in the game's online records table. 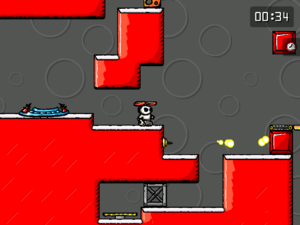 In Temporal, players control an unnamed robotical being which cannot recall his past and tries to figure out where he is, and his purpose.

With only a propeller on his head that allows him to fly for short periods of time, the quirky robot is controlled using only the arrow keys - interacting with the environment in order to advance and learn more about his surroundings.[1]

The game focuses on solving puzzles on platform-based level designs that require the player to use the environment in various ways, such as pushing boxes around, destroying floors, manipulating chemicals, using automated guns and activating terminals and trigger beams. An ongoing story filled with what the game calls techno-babble is unravelled as the player advances in the game.

The core of the gameplay involves to time travel back in time and have the robot interact with his past selves in order to solve the puzzles. Doing so might cause a temporal paradox that may create an impossible situation - however the game allows these transgressions and only gives a score penalty for such acts - often resulting in a butterfly effect.

The game features 30 story levels plus 5 unlockable challenges. According to the author, all story levels were designed so that it was able to beat them without temporal paradoxes; for the challenge levels, however, that design restriction doesn't apply.

Temporal featured an online leaderboard that allowed players to upload their records and compete with each other, trying to find faster and better ways to solve the puzzles of the game; as of July 2012, however, the site and leaderboards are no longer available.

Even though the game was released in late 2008, new records continued to be uploaded as far as late 2011, short before the site closed, which proved the replay value of the game and the multiple possibilities for solving levels as new, faster solutions appeared even for levels that were long considered to be already unbeatable.

The following is a list of the game levels and the records as they appeared on the leaderboard short before the site closed.

A built-in feature of the game records players as they play it, letting them share their unique solutions for the puzzles with other players, and also enable the player the ability to play against an existing replay to improve their current score.

Even though Temporal never enjoyed wide difussion, it generally received positive reviews from people who played it, particularly in the form of comments in sites where the game was posted. Temporal's TIGSource entry features comments like "Screenshot does not do this justice, it's really pretty awesome" and "Temporal is the only indie game that one of my friends knew about before I did, and it's a great game" [2]. On TIGSource forums, user Archonn even called Temporal the "most underrated game" of 2008.[3]

Elena Santos of website Softonic commented "If you like original platform games, you will love Temporal – even if it requires more thinking than just a standard platform game".[4]