Tentacool's name is a variation on the word "tentacle". The "-cool" suffix may refer to its being of the Water-type, and the fact it prefers water of that particular temperature. In addition, "cool" is colloquially used in the English language as a synonym for "debonair", "fashionable" or "stylish". In the English beta version, Tentacool was originally going to be called Jilly. The "kurage" of the Japanese "Menokurage" is the Japanese word for jellyfish (水母 kurage).

Tentacool's appearance is based on the jellyfish. It has a light blue, bell-shaped gelatinous body, with two eyes and a pair of brown tentacles. It has a small red gem-like structure in the place where its forehead would be and two larger such "gems" on its sides.a shiny tentacool has a grey body and has green gem-like structures

Tentacool is an aquatic Pokémon, drifting aimlessly wherever the ocean waves and currents take it. It usually ends up in shallow waters, where it may be accidentally caught in the fishing lines of anglers. A more unfortunate development for the Tentacool is to end up on the shoreline and get stuck on the beach when low tide comes. Tentacool's body is largely composed of water, so if it is kept out of the sea for too long it will shrivel up and risk death from dehydration unless it is reintroduced to water in time.

Tentacool has two main weapons. The first is its toxic feelers, located at the tips of its tentacles. It uses them to stab anything it touches with stinging acid. Coupled with its excellent camouflage in the water, Tentacool can often remain undetected by swimmers right up to the moment it stings them. The second is its mysterious beams. Tentacool's gelatinous, watery body absorbs sunlight and refracts it within, producing beam energy it shoots from its clear, crystal-like eyes.

Tentacool is available in all Pokémon games to date. In each of these games it is extremely common and is in almost every single body of water. Its high frequency of appearance easily rivals that of Zubat's.

Tentacool has low stats. It learns many moves such as Raindance, riverstream which affect attributes, such as Barrier or Bubblebeam. Usually its evolved form Tentacruel is used in battle, but Tentacool may also prove effective by poisoning the opponent and trapping it with a Wrap. Hopefully, Tentacool's high defenses will enable it to survive until the opponent succumbs to the poison. Shiny Tentacool has green "eyes" on top of their heads instead of red ones.

Tentacool was featured in episode #19 (Tentacool and Tentacruel). Large groups of Tentacool were plaguing the Porta Vista resort and the resort's owner, the aptly named Nastina, was looking for Tentacool exterminators. Team Rocket was assigned the job, they emptied several barrels of their "super secret stun sauce" into the ocean, but only managed to send the Tentacool into a rampage. With the intervention of Misty and her friends the conflict was resolved and the Tentacool returned peacefully to sea. This episode was banned, however, for the use of guns.

In Pokémon Special Tentacool's first appearance is a cameo in Bulbasaur, Come Home! as one of the Pokémon that escapes from Professor Oak's Laboratory.

One of the members of the Pokémon Fan Club in Vermillion City apparently bathes with her Tentacool on a regular basis. She is seen again with her Tentacool in Volume 14 during the Chairman's call out to all Trainers to send their Pokémon to help the fight in Ilex Forest. 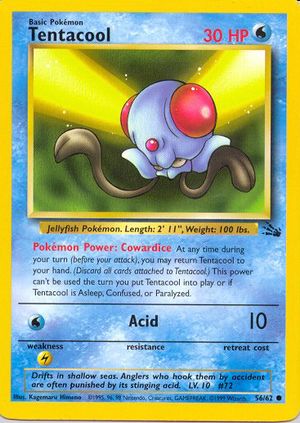 Tentacool, strangely, in spite of having been a common sight in the Pokémon video games throughout the history of the franchise, has appeared only sporadically in the Pokémon Trading Card Game, in Fossil, Gym Heroes (twice as Misty’s Tentacool), Aquapolis, EX Hidden Legends, and EX Legend Maker.