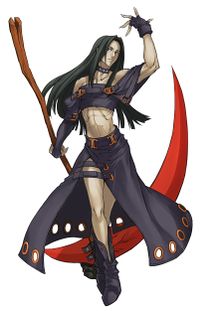 Testament is a character in the Guilty Gear fighting game series, making his first appearance as a secondary boss in Guilty Gear: The Missing Link. He must be unlocked in that game and in Guilty Gear X: By Your Side, in which he is also the secondary boss, but after that he is freely playable from the start. He himself is a Gear, and has a constant distrust for humans, even though he was formerly a human himself, and feels a fierce protectiveness towards Dizzy.