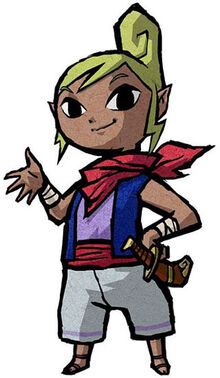 Tetra is a female pirate character who appears in the Legend Of Zelda games, primarily in The Wind Waker and Phantom Hourglass. She helped the young boy Link from Outset Island rescue his sister Aryll when she was kidnapped by the Helmaroc King under Ganondorf's orders. She carried a pendant with her that contained a piece of the Triforce in The Wind Waker and is revealed to be Princess Zelda, a descendant of the royal family line of Hyrule. Her crew on occasion continues to call her Zelda upon this revelation, much to her displeasure and choice of being called Tetra.