Tetris Splash, a recent addition to the long series of Tetris games, was published by Microsoft Game Studios for the Xbox 360 via Xbox Live Arcade. It is the first game produced by Tetris Online.

The game gets its name from the aquarium background and water-themed music. The game opens with the title Tetris Online (the company that developed Tetris Splash), and it is followed by the title "Tetris Splash." Tetris Splash was released on the Xbox Live Arcade on October 3, 2007.

The game is typical Tetris gameplay, with support for up to six players in online multiplayer, and up to four 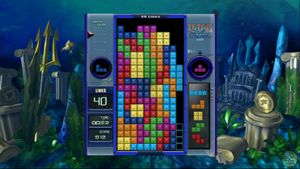 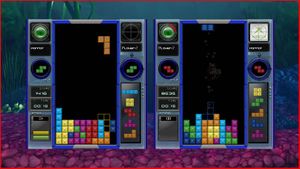 There are several game modes available.

The title was designed by Roger Dean.