The Battle for Wesnoth 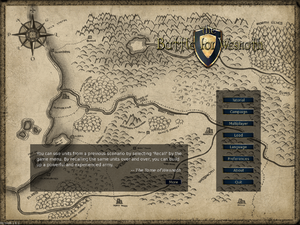 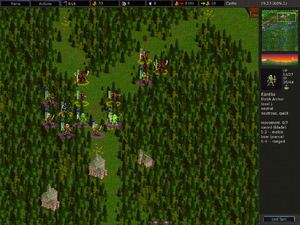 The Battle for Wesnoth is a free, open source turn-based strategy game. The setting is Wesnoth, a typical fantasy land populated with humans, elves, and orcs. Unlike some other strategy games that emphasize building, Wesnoth emphasizes unit positioning and tactics. Players of Wesnoth typically go on campaigns by themselves, or play multiplayer scenarios with each other over the internet. There is a Tutorial to ease new players into the game.

In a scenario, multiple armies fight each other for control of maps. The map contains hexagonal tiles; units can only attack units on neighboring hexes. In a typical battle, the leaders recruit units from castles. The units occupy and flag villages to pay for recruiting and upkeep. Eventually the units meet and fight. The most common objective is to defeat the enemy leader, though some maps have other objectives.

In a campaign, one player fights through a sequence of scenarios. The leader can recall units from previous scenarios and build an experienced army. The game includes Heir to the Throne; Konrad is the heir who must retake the throne of Wesnoth from the tyrant Asheviere.

The game's tutorial reveals the basics of combat in Wesnoth. Players who want to review the combat system may consult the The Battle for Wesnoth/walkthrough on this wiki.

There are two ways in which Wesnoth distinguishes its combat system from those of other games:

Defense introduces an element of randomness and luck into the game, because no one can 100% predict which strikes will hit. Thus managing luck is an important part of tactics in Wesnoth. Good players must be able to make decisions not knowing exactly what will happen.

The positioning of units is also important to tactics, not only because units can take advantage of better defense on certain types of terrain, but because wounded units that are too far away from their opponents cannot be hit by any attack.

Wesnoth is a cross-platform game built upon the SDL library. Thus, the game is exactly the same regardless of which platform it runs on.

Stable versions of Wesnoth are multiplayer-compatible with the other versions of the same branch, but not with development versions or old versions.