The Chaos Engine (released as Soldiers of Fortune in the U.S.) is a third-person shooter game created by U.K. developers The Bitmap Brothers. It is designed to be played by two people playing co-operatively. However there is a one player mode where a computer controlled ally acts as the second player. 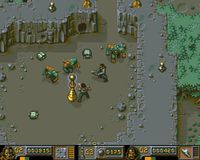 Taken from the start of the game:
Sometime in the last century, an experimenter with time, space and early computers created a bizarre machine. Although primitive, the machine became incredibly powerful and turned against its creator. Its power to corrupt time and matter was out of control. A cloud of chaos descended over all the lands. Humans and animals were turned into ravenous beasts. Enter six hard nailed mercenaries for hire.

There are 6 different playable characters to choose from, each with strengths and weaknesses. Each character has their own distinct gun and special moves. You have £6,000 to spend on both characters, and you get to keep any left over money.

A good all-rounder. He is quite mad and enjoys nothing more than experimenting with a collection of unsavory weapons.

Another well rounded talent and a cut throat bandit to boot.

A lean and clever character. He is a dapper chap without a doubt. What he lacks in muscle he makes up with wit.

The strongest of the six characters. A good fighter with heavy weapons. Although he only has a few specials they are very destructive.

When it comes to characteristics he could pass for the Navvie's brother. The Thug is a mammoth of a man, a little stupid but very powerful.

The smartest of the six characters but then, he has God on his side. Beware, his perverse nature is not to be trusted.

Note: The Preacher was renamed as the Scientist for Soldiers of Fortune (the American version) as they were worried about complaints from those in the bible belt.

There are 4 different worlds, with each world comprising of 4 levels. After every 2 levels you can visit the shop to buy upgrades for your character using the gold you've accumulated. At the end of each world you get a save code. 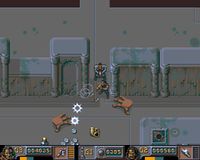 The shop is an invaluable tool for keeping your character tooled up.

You can also buy new specials for your character as their skill level increases.