The Humans was also known as Evolution: Dino Dudes for the Jaguar and Dinolympics for the Atari Lynx. The Humans was a side scrolling game, in which the player guides a tribe of humans through the course of evolution to modern man. Included on this quest is the discovery of spears, fire, wheels, rope, and torches. Anachronistically, one of the humans' main enemies are dinosaurs. The game bears a slight resemblance to the Lemmings series of games, even if this game is about direct control of the protagonists, rather than giving them tasks. The Jaguar and Lynx versions of The Humans were published by Atari. 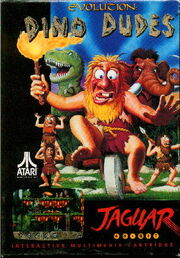