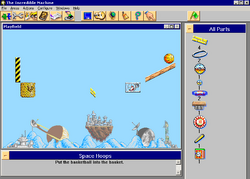 The Incredible Machine (aka TIM) is a series of computer games that were originally designed and coded by Kevin Ryan and produced by Jeff Tunnell, the now-defunct Jeff Tunnell Productions, and published by Dynamix; the 1993 through 1995 versions had the same development team, but the later 2000–2001 titles had different designers. All versions were published by Sierra Entertainment. The entire series and intellectual property was acquired by Jeff Tunnell founded PushButton Labs in October 2009[1].

The general objective of the games is to create a series of Rube Goldberg devices: arrange a given collection of objects in a needlessly complex fashion so as to perform some simple task (for example, "put the ball into a box" or "light a candle"). Available objects ranged from simple ropes and pulleys to electrical generators, bowling balls, and even cats and mice, most of which had specific interactions with or reactions to other objects (for example, mice will run towards nearby cheese). The levels usually have some fixed objects that cannot be moved by the player, and so the only way to solve the puzzle is carefully arrange the given objects around the fixed items. There is also a "freeform" option that allows the user to "play" with all the objects with no set goal or to also build their own puzzles with goals for other players to attempt to solve.

Notably, the games simulated not only the physical interactions between objects, but also ambient effects like varying air pressure and gravity. The engine does not use a random number generator in its simulation of physics, assuring that the results for any given "machine" are reproducible.

The series featured the following versions:

The developers of the series have been criticized by fans for recycling content, specifically all the games after The Incredible Machine 2, rather than creating new additions to the games.

The game was reviewed in 1993 in Dragon #193 by Hartley, Patricia, and Kirk Lesser in "The Role of Computers" column. The reviewers gave the game 4 out of 5 stars.[2]

The Incredible Machine 2 introduced new levels, an extended assortment of parts, a new interface, significantly improved graphics, sounds, and music, and two player hotseat play. It also improved on the "freeform" mode, allowing players to create completely playable puzzles by defining not only the participating parts, but also the set of circumstances under which the puzzle will be considered "solved". In terms of gameplay, this version provided the biggest addition to the series, while subsequent updates were basically only ports of the game to newer operating systems with updated graphics/sounds and sometimes new puzzles, but no new parts.

Even More Contraptions started a service allowing players to share their homemade puzzles using a service called "WonSwap", but due to the age of the game, this service is now defunct.[3]

Sid & Al's Incredible Toons and The Incredible Toon Machine are not an official part of the series, but are essentially a cartoon version of the same concept, created by Chris Cole.

The Incredible Machine was the winner of several prizes due to its innovative style and simulation abilities. It was innovative enough, in fact, that Sid & Al's Incredible Toons earned Jeff Tunnell and Chris Cole a patent for the game concepts.[4]

Some games from The Incredible Machine series are now very difficult to find, except from peer to peer networks, used software stores and online auction sites. The original publisher, Dynamix, was closed in 2001 by parent company Sierra, who was in turn scrapped in 2004 by its parent, Vivendi Universal. The Incredible Machine: Even More Contraptions, however, can be found via GameTap and Hoyle Puzzle Games 2005.

A mobile phone version was developed by Mobile Interactions Group[5] and published by Vivendi Games Mobile in 2006.[6]

The original game has been announced for a download release for the Xbox 360 via Xbox Live Arcade, but so far no price has been given and the only release date was 2009.