The King of Fighters (series)

Main article: List of The King of Fighters video games 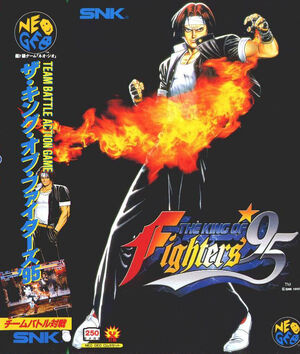 A battle in The King of Fighters '95

In July 22, 1999, The King of Fighters '99 was released, which introduced a new story arc known as "The NESTS Chronicles". The game introduces several new characters into the series, as well as the rule of a fourth member being added to each team and that a new tactic is introduced in this game as well. The tactic would be that a specific person from a team would be an assistant called a "Striker" and that this person would be able to aid the team for a few seconds in combat. The Dreamcast version was titled The King of Fighters: Evolution. There are several improvements in the game such as new strikers (featuring a few characters from previous KOF titles) and better animation.[6] The King of Fighters 2000 was released on July 26, 2000 and that this game is the second part of "The NESTS Chronicles". KOF 2000 adds a few new playable characters and a couple of Strikers (most of them being from previous KOF titles and other SNK titles as well such as Metal Slug and Kizuna Encounter).[7] The King of Fighters 2001 was released on November 15, 2001 and ends "The NESTS Chronicles" plot started in '99. Due to some economical problems that SNK had at the time (which lead to their inevitable bankruptcy), the Korean company Eolith helped in the development of the game.[8] The King of Fighters 2002, released on October 10, 2002, was created to reunite old characters from previous KOF games and featured no story, similar to KOF '98. It was also developed by Eolith.

In 2004, SNK produced the first 3D installment of the series, KOF: Maximum Impact. The game and its two sequels revises much of the backstory for characters and settings from previous games. The producer of the Maximum Impact series, Falcoon, stated that the Maximum Impact games are in a different continuity from the original series of games.[15] Another spin-off video game, The King of Fighters Neowave, was released for the Xbox, PlayStation 2 and Arcade during 2005 and 2006. Like KOF '98 and KOF 2002, Neowave has no storyline and is considered a "dream match" game. The game is a gathering of numerous characters from previous installments, including characters like Mature and Vice from KOF '96 and the New Face Team from KOF '97. The character artwork was done by Tomokazu Nakano.[16] Two video games were released for the Game Boy Advance titled The King of Fighters EX: Neo Blood and The King of Fighters EX2: Howling Blood respectively, featuring characters and backgrounds from KOF '99 and 2000, respectively.[17][18] A role-playing game was also created exclusively for the PlayStation under the name of The King of Fighters: Kyo, adaptating a manga with the same name.[19] An N-Gage version of the first Game Boy Advance game was released in 2005 titled The King of Fighters Extreme, which added Bluetooth multi-player.[20]

Three pachinko slot games were developed for the series. The first, The King of Fighters, is based on the Orochi storyline and the second, The King of Fighters 2, is based on the fight of K' against the NESTS cartel.[21][22] The newest one, Maximum Impact, was released on January 19, 2009 and focuses on the series' 3D titles. None of these was released outside of Japan.[23] Six games for Japanese mobile phones have also been developed. While a few of them are fighting games, others are mini-games like volleyball and quizzes.[24]

In addition to the remakes of individual games such as Re-bout, Ultimate Match, and Unlimited Match, SNK Playmore has released compilations of their KOF games. Two KOF compilations were released in Japan for the PlayStation 2 as part of the Neo Geo Online Collection. The first compilation, The King of Fighters Orochi Hen (ザ·キング·オブ·ファイターズ -オロチ編-?, "The Orochi Compilation") features KOF '95, KOF '96, and KOF '97, the three games comprising the Orochi story arc. The compilation features a Color Edit mode that allows the player to create a custom color palette for every character in each game, the choice to play each game with original and arranged soundtracks, and an online versus mode which supports the MMBB service.[26] The second compilation, The King of Fighters NESTS Hen (ザ·キング·オブ·ファイターズ -ネスツ編- ?, "The NESTS Compilation"), features the original Neo Geo versions of KOF '99, KOF 2000, and KOF 2001, as well as the corresponding Dreamcast versions of each game. It has the same features as the previous compilation, but with online support available only for the Dreamcast games in the compilation.[27]

A separately produced compilation titled The King of Fighters Collection: The Orochi Saga was released for the PlayStation 2, PlayStation Portable and Wii in North America, the PAL region, and Southeast Asia. This compilation has the same lineup of games as the Japanese Orochi Hen, along with KOF '94 and KOF '98, although the extra features are different, with an added Challenge Mode where the player must win certain matches against the CPU in KOF '98 under specific conditions and a Media gallery featuring listenable tracks from each game and a collection of official illustrations.[26]

See also: List of characters in The King of Fighters series

The first game in the series, KOF '94, centers around a black market arms dealer named Rugal Bernstein, who hosts the well-known fighting tournament to lure worthy adversaries into his trap so that he can kill them and turn them into stone statues, adding them to his collection of defeated martial artists. In addition to previous established fighting game stars Terry Bogard and Ryo Sakazaki, the game introduces a new hero, a young Japanese martial artist named Kyo Kusanagi, who serves as the lead character in the early KOF games. In KOF '95, Rugal, having survived the previous tournament, host a new one with the intentions of seeking revenge against his adversaries. KOF '95 introduced Kyo's rival Iori Yagami to the series and was the first game to mention the presence of the Orochi clan, which would serve as the central plot element in the following two games in the series. The tournament in KOF '96 and KOF '97 are hosted by a woman named Chizuru Kagura, who seeks to recruit allies (particularly Kyo and Iori, who are descended from the Three Divine Vessels along with Kagura herself) to fight against the Orochi clan. The Orochi storyline concludes in KOF '97, while the following game in the series, KOF '98, is a "Special Edition" with no plot development.

KOF '99 introduces a new story arc involving a mysterious corporation known as NESTS, which seeks to create an army of genetically altered fighters. The game would introduce a new lead character named K′: a fugitive from NESTS who was genetically enhanced with Kyo's DNA. The two following games in the series, KOF 2000 and KOF 2001, continue the NESTS storyline, with each game further unraveling the mystery of the organization. KOF 2002, like KOF '98 before it, is a "Special Edition" of the series with no particular plot.

KOF 2003 begins a new storyline focusing on another new lead character named Ash Crimson: a young man who seeks to possess the powers of the Three Divine Vessels for his own unknown agenda. The tournaments from KOF 2003 and KOF XI were hosted by "Those From the Past": an organization of inhuman warriors who try to break the Orochi seal to take its powers so that they can give it to their shrouded master. While KOF XII does not have a story, KOF XIII continues the plot introducing Saiki, who has been manipulating the events from the previous games.

During 1995 Tatsuya Shingyoji authored a manga adaptation of The King of Fighters '94. It was serialized in Shōnen Ace from Kadokawa Shoten and was collected into four tankōbon volumes. They were released from February 10, 1995 to December 1996.[28] There is also a spin-off manga story based on the adventures of the characters from The King of Fighters '96 entitled, The King of Fighters: Kyo. It was authored by Masato Natsumoto and published by Kodansha in two tankōbon volumes during 1997.[29] Ryo Takamisaki also developed another adaptation from KOF 96 during. Shinseisha published the series in three tankōbon compilations from June 1996 to February 1998.[30]

During August 2005, a short series based upon KOF entitled The King of Fighters: Another Day was announced. It debuted at the year's Tokyo Game Show about a month later. Production I.G produced the title as an original net animation. There are a total of four episodes, each about 10 minutes in length. It has since been released as a bonus DVD, packaged with KOF: Maximum Impact 2 (The King of Fighters 2006 in the US).[32] A live-action movie of The King of Fighters has been scheduled for a 2010 release.[33][34]

SNK has released a series of CD soundtracks known as SNK Character Sounds Collection or SNK Sound Character Collection (SNKサウンドキャラクターズコレクション). There are eleven volumes altogether and each one focuses on a single character. The CDs have different versions of the characters themes, as well as quotes. Most of the albums' covers are illustrated by Masato Natsumoto.[35] The Band of Fighters, shortened as BOF, is a character image band that is formed with Kyo Kusanagi, Iori Yagami, Terry Bogard, Nakoruru, and Athena Asamiya.

Dengeki Bunko and Pony Canyon have released several Drama CD from the series. Some of them are direct adaptations of several video games from KOF '94 to KOF '00. Another CD is Iori Yagami Original Drama The Setting Sun and Moon ~ Prologue (八神庵オリジナルドラマ 夕陽と月〜プロローグ〜), which is centered around Iori Yagami. The drama originally aired on Game Dra Night and Neo Chupi and then released by Pony Canyon CD on July 7, 1999. The guidebook The King of Fighters Perfect Reader includes the bonus CD Drama KOF: Mid Summer Struggle. There are two stories on it, one which is serious and one that is a parody focused on KOF '03. The scenarios were developed by Akihiko Ureshino and BoHyou.

In December 2006, Sabertooth Games released a King of Fighters 2006 collectable card game set along with Samurai Shodown V for its Universal Fighting System (UFS) game. Other games like Street Fighter and Soulcalibur III are also included into the series. Character starter packs were released for Terry Bogard and Mai Shiranui.

In an interview with veteran developers of the series they claim that their prototype version for KOF was going to be a side-scrolling beat 'em up titled, Survivor. In this version, it would only use core characters from the Art of Fighting and Fatal Fury series, specifically allowing players to play Robert Garcia and Terry Bogard for location testing. However, the idea was quickly abandoned after the debut of Capcom's game with similar gameplay,'. Since they were attached to the idea of the two series cross-over, they eventually agreed to make their idea into a fighting game. Characters from Ikari Warriors and Psycho Soldier games were also added in spirit of other gaming genres considered for their final product. The concept of a three-man team was one of the ideas kept from the side-scrolling version.[36]

The first games of the series were only available in Japan with the exception of The King of Fighters '95 which saw a US release on the PlayStation and a European release on the Sega Saturn in 1996. However, in 1999 when SNK was expanded to North America, the games were released also there.[37]