The Legend of Zelda: Link's Awakening

This is the first game in the Legend of Zelda series to take place outside Hyrule and the main "Triforce" storyline. This is also the only Zelda game not to feature Princess Zelda at all, except in the game's dialogue.

After training abroad, Link is sailing back to Hyrule, but is shipwrecked in a violent storm. He awakens on Koholint Island, and is taken to the house of a kind man named Tarin, and his daughter Marin (who bears a strong resemblance to Princess Zelda). A mysterious owl tells Link that to return home, he must awaken the Wind Fish by gathering and playing the eight Instruments of the Sirens. The bosses in Link's Awakening, who guard the Sirens' Instruments, are said to be the Nightmares of the Wind Fish. When Link plays the Ballad of the Wind Fish with all eight Instruments, he can enter the giant egg atop the Tal Tal Mountains, where the Wind Fish slumbers. There he must face the final Nightmare, shadowy apparitions which include umbral visions of foes from Link's past. Upon defeat of this nightmare, it is revealed that the entire island is merely a dream of the Wind Fish. By playing the instruments again, Link ends the dream. He and the Wind Fish are returned to the waking world. 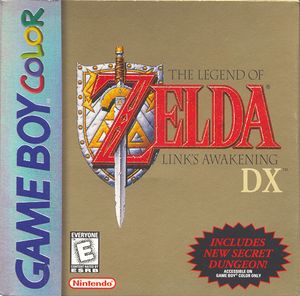 Like all games in the Legend of Zelda series, Link's Awakening is an action-adventure game. It followed its closest relative in the Zelda series, A Link to the Past, in its above-the-playfield viewpoint, sense of gameplay, and the possible actions that could be performed in the game. However, Link's Awakening greatly expanded on the formula by being the first of the topview games in the series to feature jumping and platformer action scenes. Side-scrolling caves similar to those in The Adventure of Link were added also to make full use of Link's new jumping abilities. Also appearing for the first time in a Zelda game were fishing, and flying around using a cucco. Link's Awakening was also the first Zelda game in which both buttons could be assigned to different items, neither of which had to be the sword, whereas previously one button was the sword by default.

In addition, this is the first Zelda game to include a "trading sequence" side quest. This mini-game consists of trading a series of otherwise useless items, and lasts for most of the game.