The Legend of Zelda: The Wind Waker

The game is set on a group of islands in a vast sea — a first for the series. The player controls Link, the protagonist of the Zelda series. He struggles against his nemesis, Ganondorf, for control of a sacred relic known as the Triforce. Link spends a significant portion of the game sailing, travelling between islands, and traversing through dungeons and temples to gain the power necessary to defeat Ganondorf. He also spends time trying to find his little sister.

The Legend of Zelda: The Wind Waker follows in the footsteps of The Legend of Zelda: Ocarina of Time, retaining the basic gameplay and control system from the Nintendo 64 title. A heavy emphasis is placed on using and controlling wind with a baton called the Wind Waker, which aids sailing and floating in air. Critics enjoyed the similarity to Ocarina of Time, but often complained that the large amount of sailing became tedious. Despite this, the game has met commercial and critical success and is the fourth of only six games that have received a perfect score from Famitsu magazine.

Rather than revolutionizing the series, Nintendo expanded upon several elements found in the Nintendo 64 versions of Zelda. Link's basic actions of walking, running, attacking, defending, and automatic jumping at ledges are retained. Link also uses the control system introduced in Ocarina of Time that allows him to "lock-on" to an enemy or other target. An addition to this basic control scheme is the ability to parry. When Link is locked-on to an opponent and not actively defending, certain attacks by the opponent will trigger a visual cue, a vibration of the controller, and a chime. Attacking at that point causes Link to dodge or parry then counter-attack from the rear or while leaping over the foe's head. This tactic becomes crucial for defeating armored enemies or bosses.

The various staple weapons, solving of puzzles, extensive exploration and backtracking, side quests, and dungeon system remain. In addition to these traditional elements, new gameplay features such as controlling the direction of the wind in order to solve puzzles, and the introduction of new items such as the Grappling Hook and Deku Leaf were added.

The game was relatively simple to complete for veteran Zelda players, and is considered one of the easier games in the series. The overworld masks any loading sequences and appears as one continuous ocean, littered with the occasional island in a grid-like topology. Some players disapproved of the lack of any large land masses (all islands are relatively small), cities and towns (there are only three islands that have actual shops, houses and such; over thirty other islands do not), and the lengthy periods of time spent sailing between islands. Others, however, found the style a refreshing change from the Zelda formula that has appeared over the years.

The Legend of Zelda: The Wind Waker also includes a massive side-quest called the Nintendo Gallery, for which Link must take photographs (using his Deluxe Picto-Box item) of all unique enemies and friends throughout the entire course of his adventure, and deliver them to the sculptor Carlov, who can then make figurines of them out of a material called "Rainbow Stone". It takes him one whole day to make a new figure, but this is not a problem once the player has the song of passing. With a total of 134 figurines to collect, this is one of the longest side-quests ever featured in a Nintendo game.

After completing the game, the player can replay it with minor modifications: Link starts with the Deluxe Picto Box, making the Nintendo Gallery side-quest easier; Aryll wears a skull dress given to her by pirates; Link can understand the Hylian language; and Link wears blue crayfish pyjamas throughout the game instead of the traditional green tunic and cap.

Another popular side-quest present in all Zelda games, collecting pieces of heart, returns. The Wind Waker also includes the addition of hunting for Treasure Charts, which are scattered throughout the Great Sea. The player must find, recover, and hunt for whatever is on the map. Treasures include rupees, pieces of heart, and other various charts such as the "Big Octo Chart" and the "Island Hearts Chart."

One new gameplay element in The Legend of Zelda: The Wind Waker is the Tingle Tuner. Once a player has acquired this item in the game, they can attach a Game Boy Advance (GBA) to their GameCube using a GBA-to-GameCube cable. By turning on their GBA and then activating the Tingle Tuner item in the game, they can interact with Tingle. Tingle helps the player in many ways: you can buy equipment, reveal hidden chests, give hints, look at a detailed map of each area (the map shown on the GameCube screen is nowhere near as detailed as Tingle's), get Tingle to drop bombs, and a myriad of other actions, etc.; all for a cost. Tingle doesn't believe in charity, you must pay him to complete most of these actions. However if you are able to find certain secrets the prices of some of Tingle's products may drop.

This linking is not required to complete the game, but it helps enrich the gameplay experience, and is required it to collect some of the non-mandatory side-quest items. The player cannot use the Tingle Tuner item in-game if the GameCube doesn't have a Game Boy Advance or Game Boy Advance SP in the real world to communicate with. 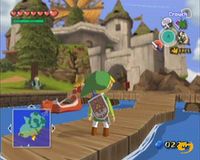 The cel-shaded style from The Wind Waker.

Nintendo's decision to render the game's graphics using a technique called cel-shading (an advanced computer graphics technique applied to 3-D objects to give the game a hand-drawn look) was one of its more controversial moves in recent years. The cel-shaded graphics featured in The Wind Waker are a strong departure from those featured in The Legend of Zelda: Ocarina of Time, which used a more realistic anime-influenced art style. When first shown at Nintendo's Spaceworld convention, the public split into two groups - those who embraced the new graphics, and those who shunned them, often using the name "Cel-da" to refer to the game. This was particularly surprising after an earlier demo shown at Spaceworld 2000 featuring a highly realistic battle between Link and Ganondorf. Miyamoto explained that he had begun creating the game with a realistic graphical style, but wanted to try something fresh and innovative.

Effects such as swirling smoke and licking flames are fancifully stylized, and add to an overall "interactive cartoon" effect. The anime influence is still present, and it is far more apparent, with a prevalent super deformed style. The game's animation system is very developed, and characters move in a lifelike and very believable way, despite their somewhat unrealistic proportions. In addition, Link features an array of facial expressions used to convey the character's emotion (without speech), and his large eyes react to objects and characters in the world. For example, Link's eyes may follow a suspicious torch as he runs by it, indicating it may be integral to solving a puzzle of some sort. 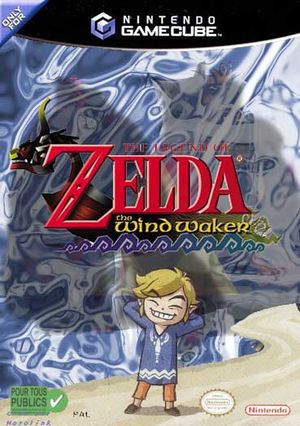 One of the game's more impressive visual aspects is its draw distance; while not all distant objects are viewable, most islands can be seen as rough outlines even when they are a considerable distance away, which adds to the sense of coherency in the game world. Depth-of-field effects add a blue haziness to more distant objects, and there is an astounding area of sea to navigate - although this has been criticised as diluting the gameplay.

While most people think of cel-shading when they think about the game's graphics, there is actually more to the graphics. Most cel-shaded games have a black outline around every object. However, The Wind Waker does not use this effect. Advanced effects such as bump-mapping are also used, a rarity for cel-shaded games even today. A real-time physics engine affects anything loose, such as cloth, hair, rope bridges, and pots.

Upon release, the game received critical acclaim, with some of the highest ever review scores. The application of the graphical style was soon considered a relative success. However, many fans are still divided due to the cel-shaded graphics and light-hearted elements, with many claiming the game was overrated and too childish, and others proclaiming the cel-shaded look to be the definitive graphical style for the series. Yet others claim that the The Legend of Zelda series has no definitive art style, and the cel-shading is simply one art style out of many that is likely to be used over the course of the series. 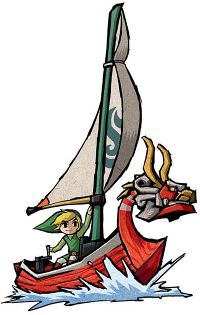 Young Link in the King of Red Lions.

For more information see: The Legend of Zelda: The Wind Waker/Story

However, matters are complicated when Aryll is kidnapped by a large bird, known as Helmaroc King, a servant of Ganon, and pirates show up on the island. Helmaroc King also kidnapped some other girls elsewhere across the Great Sea. The leader of the pirates, Tetra, agrees to take Link aboard the ship and assist him in rescuing his sister, who is being held at the Forsaken Fortress. It is soon discovered that Ganon, who was sealed away in the Sacred Realm at the end of Ocarina of Time, has returned from his imprisonment. Link sets out to save his sister, as well as all of the Great Sea (and more) from Ganon.