The Legend of Zelda: Twilight Princess

The Legend of Zelda: Twilight Princess is the sixteenth game of the The Legend of Zelda series. First announced at E3 2004, it was originally slated for release in November 2005 for the GameCube, but was delayed so much that it was eventually released as a launch title for the Wii, over a year later. The GameCube version was released a month later.

At E3 2006, President of Nintendo of America Reggie Fils-Aime described Twilight Princess as "...by far the best Zelda game we’ve ever made." It is the first game in the Zelda series to be rated T (for Teen) by the ESRB instead of E (for Everyone).

The story begins in the village of Ordon, as Link goes about his day, rounding up goats at the ranch and playing with the village children. Link has a Triforce marking on his hand. However, just as he is about to leave for Hyrule Castle to present a gift sword to the Royal Family, Moblins riding boars raid and take Ilia and Colin, two of villager's residents. Link runs after them desperately, only to find a mysterious black wall stretching high into the sky in his path. A black hand from beyond the wall reaches in and pulls Link in.

Beyond the wall, Hyrule is dim and covered in an orange glow, and strange black dust drifts through the air. Link falls to the ground and passes out as his body transforms into a wolf in this different world. A shadow-like being drags him away, and he wakes in a dungeon, chained to the floor.

A voice calls from him in the dark, and Midna, a short imp-like girl with a broken stone helmet, appears and breaks his chains, offering him assistance in escaping if he does what she says. With Midna's guidance he escapes his cell, and she guides him through an unknown sewer. Eventually Link finds himself on the roof of a castle - Hyrule Castle. It is abandoned, except for the confused and terrified spirits of the Hyrulian guards, who Link can "sense" as a wolf.

In a tower across the rooftops, Midna introduces Link to Princess Zelda. Zelda explains that a strange curse called the Twilight Realm is spreading across Hyrule thanks to an evil king of darkness. If unchallenged, it will consume Ordona, all of Hyrule, and eventually the entire world. To save his friends and Ordona, he and Midna head back to Ordona.

Upon returning, Link finds himself still a wolf. He can return to his normal form if he helps the forest spirit Faron, one of Hyrule's four spring spirits, find its "light" lost in the Twilight Realm. With Midna's help, he steals a sword and shield from the villagers nearby for when he becomes human again, and then sets off into the Twilight Realm. There he must obtain items by the name of "Fused Shadows" for the imp Midna.

After retrieving the spirit's light, he becomes human again - but is shocked to find himself wearing the green tunic and hat of the legendary hero. Faron explains that Link is the hero of destiny, and that it is his responsibility to protect Hyrule and restore it to peace. The mysterious Shadow usurper Zant and his army of dark monsters stand in his way.

Once saving the different races and the world from the Twilight Realm, The evil Twilight king Zant comes. Taking the Fused Shadows, he leaves Link with a shard in his head, allowing him to turn "canine" and human whenever necessary. So Link begins to look for the Twilight Mirror, which has been shattered. 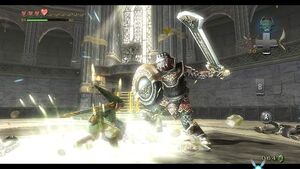 The gameplay of Twilight Princess is what you can expect from a Zelda game - evil is threatening the kingdom, and you must gather magic items and powerful tools in dungeons to defeat bosses and bring justice back to the world. A duality of worlds is a common theme in Zelda games, but Link's transformation between worlds has never been as drastic as in TP. Link has two forms: wolf and human. As a wolf, he is capable of running faster, digging to reveal passages and items in the ground, and using his keen "senses" to see spirits and scents. His wolf attacks are also different, such as a leaping, gnashing combo that allows him to consecutively attack enemies in a sequence. He can also make large jumps with the help of Midna, who rides on his back while he is a wolf and provides help and hints.

As a human, Link can use his sword and inventory of weapons & equipment to kill monsters and solve puzzles. To make up for his slow speed, he can ride Epona as a way to travel across Hyrule's huge overworld faster. He can open doors, press switches and basically do more things than he can as a wolf. However, his attacks are generally not as strong.

The GameCube and Wii versions have different control methods. The GameCube version is more traditional, and similar to the controls in The Legend of Zelda: The Wind Waker. The Wii version uses its motion sensitive controller for slashing & aiming ranged items like the Bow & Slingshot, while the nunchuck is used to move and Z-target. The controls change for mini-games such as fishing.