The Lost Mind of Dr. Brain

The Lost Mind of Dr. Brain is the third installment of the educational Dr. Brain series, created and published by Sierra Entertainment.

As in the first two games, Lost Mind features science related puzzles. Where the previous installments featured a large, semi-free-roaming environment, however, Lost Mind confines the player to one single area (Dr. Brain's laboratory), with puzzles accessed from a central 'map' screen. Similarly, while the previous games' puzzles ranged across a variety of disciplines (both Castle and Island contained memory and word puzzles, as well as puzzles related to art and the sciences), Lost Mind focuses solely on the human brain, with puzzles related to spatial orientation, memorization, and symbolic association.

Due to the restricted game environment, much of the humor that was found in the first two games is missing in Lost Mind; since the player no longer has free rein over an entire island or castle, there is very little to explore, and very little with which to interact.

Between the second and third installments, several new characters have been introduced: Dr. Brain's niece, Elaina, is on hand to replace Dr. Brain as host, and also serves as a guide to Dr. Brain's mental pathways. Also, Rathbone, Dr. Brain's laboratory rat, provides what limited verbal humor can be found in the game. 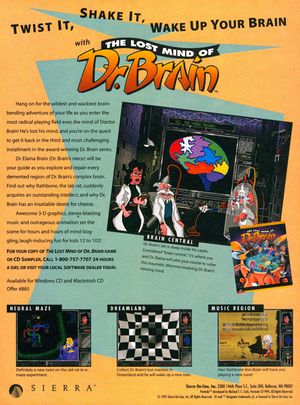