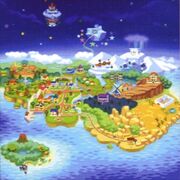 The Mushroom Kingdom in Paper Mario

The Mushroom Kingdom is a famous land where most of the games in the Mario series takes place. Its leader is usually Princess Peach, however, in Super Mario RPG it is the Chancellor of the kingdom. The Kingdom's capital is Toad Town.

King Bowser Koopa has tried, and failed, to take over the Mushroom Kingdom on many occasions. He, however, has ambiguous ambitions when it comes to gaining control of the Kingdom. Often it seems he is most interested in simply marrying Princess Peach.

"Forever Forest" is an area of the 2001 video game Paper Mario. The forest's setting is located in the Mushroom Kingdom. The forest consists of a maze with many paths. The six "sections" of the forest are circular paths with four paths leading away from it. One path goes on to the next "section" while the others bring you back to where you started.

Other Kingdoms and lands in the Mario Universe[edit | edit source]

As the Mario series has grown and changed many new Kingdoms have been created. These include: