The New Tetris is a puzzle video game released for the Nintendo 64 published by Nintendo. Although the game is based on the popular Tetris game mechanics, it made significant additions that has since then been in all Tetris games that followed. The game was released on July 31, 1999 in North America. 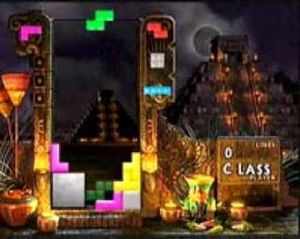 Single player node, with a silver square in the lower-left corner.

In order to differentiate from other variations of Tetris available (such as Magical Tetris Challenge, Tetris 64, and even Tetrisphere, The New Tetris features significant changes made to the core gameplay.

The New Tetris was the first game from the official licensed line of Tetris that removed the concept of leveling by lines and points, due to the fact that The New Tetris' line clearing system rewards players with creating gold/silver blocks. Instead, the difficulty level and the speed of the tetris blocks now depends on the number of lines cleared since the start of the game, the length of time of the game being played and the type of the blocks used to clear those lines.

For example: If two players both have 600 lines cleared, it is possible that player A is at a higher level because they have completed that many lines in a shorter time, or they were able to clear those lines while using more gold/silver blocks. The same can be said for any of the three criteria.

However, the concept of level remains in in the game as each player profile stored in game is given a level rank based on their past performances. Beginning players start at Level 1, and can increase their rank up to Level 30 (the maximum reachable in the game).

In The New Tetris, players are rewarded if they create 4x4 large square blocks using 4 tetrad shapes. The 4x4 blocks must be constructed from whole tetrad shapes, and there are two variants: Gold Squares and Silver Squares.

When the player creates a 4x4 square using miscellaneous tetrads, a silver square is formed. Examples of this include using 2 of both variants of the "L" blocks, or two squares and two "I" blocks. In total, there are 29 combinations (ignoring orientation) that can form Silver Squares.

When the place creates a 4x4 square using the same tetrads, a gold square is formed. Due to the nature of the "z" and "s" blocks, it is impossible to construct a gold square from such shapes. In total, there are 8 combinations (ignoring orientation) that can form Gold Squares.

This new addition creates a much more interesting strategy and changes the dynamics of how each block can be used. While in traditional tetris, the "L" block and the "I" are used as fillers to cover up gaps, many players in The New Tetris may favour using these blocks to create gold/silver squares. This important risk/reward tradeoff (keeping the playfield empty vs. high scoring) adds more depth to the simple mechanics found in the original Tetris gameplay.

The New Tetris, along with The Next Tetris, were the first official Tetris games have multiple piece previews, showing the player the next three blocks in play. This addition allowed players to make new strategic decisions based upon the upcoming blocks.

In traditional Tetris, block preview is limited to just one tetrad, which limits the player's ability to plan ahead, creating a more reflex-oriented puzzle game. With the new three block preview, players can now plan their next few steps, which is a vital feature when combined with the new Gold/Silver blocks and Hold Block.

One other feature is that certain moves that are "physically impossible" are permitted, whereby pieces can be slipped into certain types of empty areas by rotating "over" the other pieces. In certain cases, this causes all the squares above and/or below the "slipped-in" piece to "disassociate" from their original pieces and fall down, possibly clearing many lines and filling in empty spaces in the bottom portion of the play area. Unfortunately, the "disassociation" process causes 4x4 squares to become ordinary pieces again and so they no longer carry their multiplier when cleared.

Blocks now cast a shadow at the bottom of the pile projecting it's final location. Although some players have complained that this addition made the game easier, it has since then been adopted into the official line of Tetris products.

Players now have the option of quickly placing a block by pressing Up on the D-Pad instead of holding Down on the D-Pad until the block slids into place. This new method allows players to quickly place a block and move on to the next one. However, this move makes it more difficult to perform a Block Spin, as the blocks will be locked in place much faster. 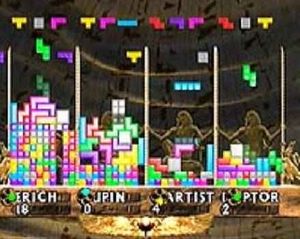 In multi-player mode, players can choose between three different garbage settings: None, Directed and Hot Potato. Garbage lines are given to a player when a opponent clears two or more lines in one drop. The number of garbage lines passed on is one less the number of lines cleared. For example: Clearing two lines gives another player one line; clearing four lies gives another player three.

When players create a user tag in the game (up to ??? user tags are possible), they are given a default ranking of 1.  Maximum ranking level is 30.  Upon completion of any play modes, the score is tabulated and a new ranking is assigned.  Up to 4 players can play at a time, or you may choose to play against the CPU.  The CPU difficulty can be changed between easy, medium, hard, very hard and master.  **Note: Playing against the CPU can only be done in 1Player mode.

Marathon is the name of classic continuous mode found in any Tetris games. As mentioned before, the old rankings and leveling system has been replaced by an ambiguous level system which increase depending on time, the number of lines cleared, and the methods of how those lines are cleared. Due to this new scoring algorithm, in addition to the other gameplay changes made in The New Tetris, it is hard to compare the diffuculty settings between the this game and other iterations of Tetris.

Sprint is one of two new modes created specially for The New Tetris. Given a three minute (3:00) time limit, players are given the objective to try to clear as many lines as possible.

Ultra is the other new mode created for The New Tetris, and it's objective is the exact opposite of Sprint. Players are given the objective to clear 150 Lines, and the quickest time is logged and ranked accordingly. 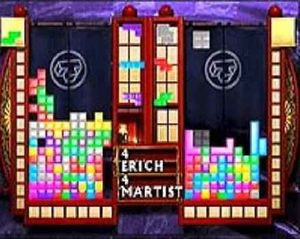 One of the key factors that made The New Tetris more addictive than the original is its techno themed soundtrack by Neil D. Voss, the composer behind the music of Tetrisphere.

Interesting note, while the music in The New Tetris is regarded as some of the best sampling work done on the Nintendo 64, it is still composed in MIDI.

Wonders of the World[edit | edit source]

Another interesting differentiation that The New Tetris features a "Wonders of the World" collection. Upon completing a certain amount of cumulative lines in any of the game modes, the player is rewarded by a "Wonder of the World", a scenic fly-bys of famous structures (such the Sphinx or a Mayan temple). However, it was evident that the development team at Blue Planet Software and H2O Entertainment did not place heavy emphasis on this area, as the realtime scenes suffered from horrendous framerate problems, along with blurry textures, low polygon count and heavy fog usage. In the end, it was a low point to what otherwise a perfect puzzle game.

Also after completing certain wonders when the game is rebooted a special screen appears with a new cheat code to enter into one player mode as a name.

Enter "2FAST4U" as a name in 1P mode. Then highlight "OK" and press A. =Player's blocks fall faster.

Choose "Haluci" as the song at the Audio options screen. Enter "HALUCI" as a name in 1P mode. Then highlight "OK" and press A. (To disable cheat you must reset the game.)  =Kaleidoscope.

Enter "01DERS" as a name in 1P mode. Then highlight "OK" and press A. =Delete line totals and reset Wonders.

Enter "1N175R4M" as a name in 1P mode. Then highlight "OK" and press A. =Delete line totals, reset Wonders and erase high scores.