The game also features 3 more scenarios, election in the American Civil war, an election taking place in European Union (which has different names on some countries) and an alien world.

The developers have said that they will add new content into the game before November 4 (the election) and will update the issues as they change in importance. New candidates are also planned once minor bugs are ironed out.[2] 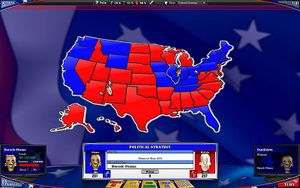 A screenshot of the main screen, showing candidates Barack Obama and John McCain.

It is not possible to run as a third-party or independent candidate.

The Political Machine received mixed reviews, with a Metacritic average of 73%. IT Reviews said that "the gameplay is sufficiently engrossing and varied to keep your interest".[4] Gamespy called it "a really solid 'beer & pretzels' strategy game".[5] 1UP.com complained that "with more focus on the real-world conflicts and unpredictable events that plague campaigns, running for office might be a bit less tiresome".[6]