The Simpsons: Bart vs. the World

The Simpsons: Bart vs. the World is a video game released for the Nintendo Entertainment System and the Master System that is based on The Simpsons.

The premise is that Bart has to travel to four different locations around the world to collect various Krusty-themed treasures. Along the way four of Mr. Burns' relatives and their minions try to stop Bart from accomplishing his goal. With cameos from every member of the Simpsons family and other characters, a variety of fun mini-games, and unique worlds for Bart to explore, this game stands out as a jewel among the many Simpsons video games released in the early 1990s. 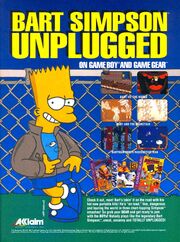 1994 print ad for the games Bart vs. the World, Bart & the Beanstalk, and Bartman Meets Radioactive Man.
Retrieved from "https://gamicus.gamepedia.com/The_Simpsons:_Bart_vs._the_World?oldid=103169"
Categories: