One day, after Bart Simpson illegally buys a Rated M game called Grand Theft Scratchy and has it confiscated by his mother Marge, he discovers a manual for a videogame called The Simpsons Game which grants his family members various types of powers. Soon the entire family with the exception of Maggie puts their newly-discovered powers to the test and accomplish their own ends with them. However, soon after they achieve their own ends, an alien invasion of Springfield takes place, and the Simpsons must now use their powers to save their town from disaster. To do that, they must meet Professor Frink and get from him a strategy guide that will give the family power upgrades. The story eventually takes the family through meeting their creator Matt Groening, who reveals to them that he creates all these videogames featuring the Simpsons for money, and ultimately through meeting God.

Players switch off between two characters pre-selected for certain levels. Bart can turn into Bartman, who can glide with his cape and shoot out zip-lines for him to travel on. Homer can turn into a ball and smash through things with his fat; he can also let out a powerful burp to stun his enemies. Lisa can use the "Hand of Buddha" to move things around and stun enemies with her saxophone playing. Marge can use her megaphone to influence people she comes across to do her bidding. Maggie, who accompanies Marge, can crawl through airducts and shoot out her pacifier at certain targets. Throughout the game, the four main Simpsons characters can collect items for winning trophies (Krusty the Clown trophies for Bart, Duff Beer trophies for Homer, Stacy trophies for Lisa, and hair product trophies for Marge). The Comic Book Guy will also point out various videogame cliches at certain points in the game.

The game consists of 16 levels.

This game makes humorous references to various other video games including: 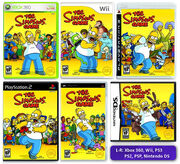