Thief: The Dark Project is the first game in the Thief series, released in 1998. It is the story of Garrett, a master thief, and the sinister plot he intertwines himself into while merely attempting to live off of his chosen profession. Based upon the Dark Engine, the game brought many new ideas and technological achievements to the software industry when it was released.

Although the game initially reported low sales, as time continued, the game gained a devout and ever-growing fanbase. The game was, in the eyes of those who knew of it, one of the best games of the year and certainly one of the top games of all time. It was innovative, fun to play, contained an immersive storyline, intelligent AI (for the time), and most importantly, different from everyone else. In a time where first-person games were all about how fast and furious the combat was, Thief came along with its average graphics and deliberate (but heart-stopping) gameplay, and people loved it. The industry even coined a new genre, the stealth action, in reference to this stellar game.

You play the role of Garrett, a cynical, extremely talented master thief with a unique history, trying to make a living in the City. The City is a dark, tightly-knit urban centre, with a look somewhere between Victorian-era London and a magic-filled medival village. The time period is unique; weapons have not progressed much beyond swords and bows, yet gas lights illuminate the dark alleys, and simplistic machines are occasionally available. Beneath all of this lays a curious magical undercurrent as well.

Garret shares this Victorian-esque, urban city with two factions; the Hammerites, an strict political and religious group who essentially own the city, and the Keepers, an ancient group of magically-trained intellects who hide in the shadows and attempt to keep balance within the walls of the city. Beyond the walls lies a mysterious group of people known only as the Pagans, uncivilized forest-dwellers who abhor the sprawl and destruction of the City. 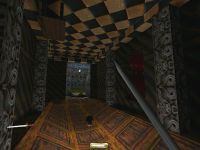 Constantine's Mansion - yes, that's a light on the sunken floor and benches on the tiled ceiling...

Although the game contains many interesting (and sometimes hilarious) sub-plots to follow at your own leisure, the main plot of the game comes into its own after a few missions. You are hired by a mysterious figure named Viktoria, to steal a sword from an eclectic newcomer to the city, Constantine. After navigating the man's house (an ongoing project of his lack of sanity, apparently), you steal the sword and return it to Viktoria, only to have her and Constantine awaiting your arrival. They reveal to Garrett that the sword was only a test of his skill - Constantine is the true customer, and wishes Garrett to steal a special artifact, known only as the "Eye", from a closed-off section of the city.

After an extremely difficult and elaborate set of missions, Garrett obtains the Eye and returns to Viktoria's mansion. Viktoria suddenly reveals her true form - a Pagan monster - and rips Garrett's right eye from his face as a sacrifice to the Eye. Constantine reveals himself to be the Trickster, a powerful Pagan god-like demon of ancient Hammerite texts.

With the help of the Keepers, Garrett escapes and is sent to stop the summoning that the Trickster intends to use, to plunge the city into eternal darkness and return the land to its original form. After (reluctantly) saving a Hammerite shrine from a horde of Pagan monsters, the Hammerites offer to help by forging a fake, booby-trapped Eye. Garrett sneaks into the Maw, the den of the Trickster, and replaces the real Eye with the fake. Just before the summoning is complete, the Trickster reaches for the eye and is killed. Garrett then stops the summoning and saves the City.

The cast of the story is a small one, but there are a few main players in the game, besides Garrett himself.

Garrett's trusty blackjack comes in handy for two things; knocking out an unsuspecting person from behind, or striking against a surface to attract an enemy. Unlike the other two weapons you can carry however, equipping the blackjack will not increase your visibility or slow your movement speed.

Garrett carries a sword only for his own protection in an emergency. He is a master thief, not a warrior. As such, only in rare or unavoidable circumstances will he actually attempt to fight with another person. The sword can be used to backstab an unalerted enemy and kill them immediately, and also can be used to cut wall tapestries that hide many secrets of the game.

Perhaps Garrett's most useful tool, the bow can be used with a plethora of different ammunition.