Thief II: The Metal Age is the second instalment in the Thief series, released in 2000. Based upon the original, but upgraded Dark Engine, the sequel is comfortably similar to the original game, but with many improvements to ensure the continued popularity of the series.

In a rare move in the software industry, Looking Glass Studios actually listened to the fans criticisms of the first game. This sequel revolves much more around Garrett looting and stealing from the rich of the city, while attempting to unfurl the mystery behind the Mechanists, rather than fighting the strange monsters like those encountered in the first game.

On the streets and rooftops of a darkened city, where magic and technology mingle and the forces of a corrupt sheriff lurk just beyond every shadow, it takes someone with a soft touch and even softer step to stay ahead of the law, and steal enough to survive. For an honest thief like Garrett, the choices are clear—profit... or perish.

Players once again occupy the weathered boots of Garret-master thief, expert in stealth and unlikely victor over the mad nature god, the Trickster. It's been over a year since the events portrayed in Thief: The Dark Project, and Garrett's life has returned to a kind of chaotic normalcy, marked by daring independent thieving runs and lucrative "jobs". But the cost of business has just gone up, and Garrett may end up paying with his life.

Enter Gorman Truart, newly elected sheriff and bane of the city's underworld. More than just an elected official sworn to uphold public office, Truart is a man with dark, unknown intentions. The poor and desolate are snatched from the streets, never seen nor heard from again. "Semi-legitimate" operations run by well-known wardens are raided and shut down. The increase of guard patrols has lulled the residents into a false sense of security, while corruption, graft, and treachery run rampant through the sheriff's organization. To a certain master thief, these events could probably be overlooked if not for one very disturbing fact: Sheriff Gorman Truat wants Garrett dead, and will stop at nothing until he succeeds. It's your job to keep Garrett alive, and discover the reason for the sheriff's vendetta.

The action in Thief 2 is set against the intrigue and mystery of the well-established city, where several factions struggle to satisfy their own, often opposing, agendas.

Foremost are the Mechanists, Hammerite separatists who abandoned their original leadership after the Order's disastrous run-in with the Trickster. The Mechanists are just as fanatical as their Hammerite cousins, but far more technologically innovative. Their advanced technology has altered the very landscape of the city, and they've won favor with the local nobility by handing out plenty of high-tech toys. The city's criminal element isn't as lucky: the Mechanists have also been suppling the Sheriff with sophisticated security devices, like mechanical beasts specifically created to hunt and kill, security cameras and turrets that shoot deadly cannon balls.

Directly opposed to the Mechanists are the Pagans, the last remnants of the Trickster's forces. With their forces depleted and their infrastructure weakened, the Pagans act as saboteurs and guerillas, spreading their anti-technological message by performing daring hit-and-run raids against the Mechanists.

And then there are the Keepers, the enigmatic holds of knowledge who observe all of the city's events but never actively get involved. Instead, they continue to persuade Garrett to act on their behalf, as their warning rings in his ears: "Beware the Dawn of the Metal Age." As an ex-Keeper who abandoned the order and its secluded, monastic lifestyle, Garrett couldn't be bothered with prophecies or portents of evil. He's played the hero once, and wants nothing to do with his former associates... no matter how persistent (or right) they may be.

In addition to the main protagonist Garrett and the usual assortment of the Keepers, Hammerites, Pagans, and Viktoria, there are many new and some old faces in the game: 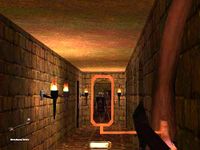 Garret takes aim at a guard with his bow.