Think Quick! is an adventure game made by The Learning Company, a company started by Warren Robinett, creator of Adventure. The game plays a lot like Adventure, contains some of the same gameplay elements, and is even built off the same engine.

A dragon has taken over the Castle of Mystikar, and you choose to play as either a boy or a girl who wonders around the castle in search of pieces of the enchanted knight's armor that can come together and slay the dragon. Most of the game consists of walking around and picking up things with space bar, and then dropping them at the right place. You had sort of an inventory screen called the 'hideout' that was like a mini-level that you could retreat to at any time with the press of a button. You could pick up items and store them there, or put them in the magic cauldron, causing them to turn into puffs of magic smoke. The magic smoke would sometimes take the form of a piece of the knight's armor, but most of the time it wouldn't. Each level had pieces of a map that you could pick up and drop in the map room in your hideout, which would cause them to snap into place.

The only enemies in the game were different colored slime worms. If you were eaten by a slime worm you'd have to navigate your way outside of the Slime Worm's Belly, which was a single room that always looked the same, and had really fast randomly moving circles in it. If one of the circle things touched you, you'd get stuck to it for a while and when you got unstuck you'd be where ever the circle moved to. If you couldn't dodge the circles you could get stuck in the Belly for a long time.

You could pick up flower items that the worms would eat instead of you. There was also a magically animate plunger (or at least, that�?¢â�??¬â�??¢s what I always thought it was) that would cause the worms to ignore you and go to it, until they eventually got stuck circling around it. 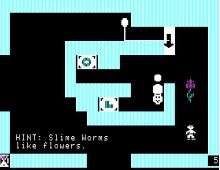 Most of the gameplay had to do with the doors and door knobs. Doors were two blocks long and either horizontal or vertical with an arrow pointing to the left, right, up or down. Each door had a knob that occupied a block's worth of space. If the player stepped on the panel that the knob was in the door would shift two spaces in the direction the arrow was pointing, and the arrow would then flip. So touching the know would toggle the arrows back and forth, opening a new path, and sometimes closing a different path at the same time. There were often complicated puzzles where walking down some halls forced you to touch knobs, or where opening one door closed off another path.

The room the knight was in had four keys placed between three rows of flying bell things. On the opposite wall to the keys was a door with four key holes. The player had to manipulate the knight over the keys, which would cause a hand to appear between the arrows, and the player had to grab the hand to make the knight grab each key. Then he had to take each one back to the lock without getting caught. If he touched an alarm it would start to ring and call the dragon, who would pick up the knight and take him back to the starting place and make him drop the key he was holding. The knight could do all the things the main character could do, but it had to be done by grabbing switches. Controlling the knight was basically like using the character to control a second character.

The coolest thing about the game was the level editor. You could create your own level any way you wanted, put slime worms, plungers, flowers, maps, doors, knobs and magic items anywhere you wanted. The customized levels could cover many screens, and could be as complex or as simple as you wanted.