Togepi (トゲピー, Togepī, Togepy in original Japanese language versions) are one of the 493 fictional species of Pokémon creatures from the Pokémon media franchise.

The Pokédex says that this Pokémon's "shell is filled with joy" and that it will bring happiness to its trainer as it travels along with him/her.

Togepi's name is derived from the Japanese "toge", meaning "spike" (referring to the top of this Pokémon's head), and "pii", the sound a chick or small bird makes.

It is most famous for being the first of the second generation Pokémon to be known, although Ash did see a Ho-Oh in the first episode, but it wasn't named.

Togepi is a small, light yellow Pokémon with a round body that's covered in a white egg shell that has red and blue rings on it. Togepi has stubby hands and round feet with two toes each. Togepi has black eyes and five spikes on its "head".

In the Pokémon Gold and Silver and Crystal games, Togepi first appears as a mystery egg given to the player by a minor character called "Mr. Pokémon", which he/she has to take back to Professor Elm. It appears again after the player beats Falkner, the first Gym Leader. One of Professor Elm's helpers visits that city's Pokémon Center to ensure that the player receives the egg, and it will later hatch into a Togepi.

In Pokémon FireRed and LeafGreen, a man near Island Five of the Sevii Islands will give the player a Togepi egg.

In Pokémon Ruby and Sapphire, a lady outside the Pokémon Center of Lavaridge will give the player a Togepi egg. Same for Pokémon Emerald

In Pokémon XD: Gale of Darkness, a scientist at Outskirt Stand will give the player a Shadow Togepi to purify. It can be traded for an Elekid.

In Pokémon Diamond and Pearl, Togepi appears in Pal Park and Route 230 using the PokeRadar.

Togepi's movepool is rather limited, making it difficult to train. It is not considered to be a very strong, competitive Pokémon, and is mostly adored due to its appearance. It will evolve into Togetic once it reaches maximum happiness.

Togepi appears from the Pokéball item in Super Smash Bros. Melee. Like Clefairy, Togepi uses Metronome, but unlike Clefairy, the resultant attacks cause status effects in the area around Togepi (Ice Beam, Dig, Growth, Rest), with the exception of one rare attack, where Togepi blackens out the screen for a few seconds (Night Shade) which can cause mass chaos, especially on moving levels or boss fights. It is also an unlockable trophy.

In "Attack of the Prehistoric Pokémon" in the Pokémon television series, Ash discovers an egg in the ancient ruins at Grandfather Canyon. They carry this egg around until "Who Gets to Keep Togepi?". At that point Ash's Pokédex doesn't know about Togepi and it says that there is more to be discovered about it.

The egg hatches and after a long dispute (in which even Team Rocket's Meowth says he wants to keep it) it is decided that Misty will keep the newly-hatched Pokémon (since she was the first person Togepi saw when it hatched). Since then, she has grown inseparable to it and carries it around everywhere, going frantic whenever it gets lost (which happens very often).

Throughout the series, Togepi has been known to befriend a number of Pokemon which normally are not friendly such as a Gastly and Haunter aboard an abandoned ship, a Voltorb and even a Houndoom. It may also notice something the group does not, such as a ribbon when searching for a Marill, footprints, and recognizing Gligarman's identity before Ash and company do.

Like in the game, Misty's Togepi doesn't learn many damaging attacks. Oddly enough, the only time Misty decided to use Togepi in battle in "The Totodile Duel," Pikachu decided to forfeit, giving Misty the first win of three rounds. The only attack it has been seen to use is Charm and most notably, Metronome, which usually saves Ash and his friends from mortal peril; in one instance, it teleported them out of danger, another, it created a huge explosion, and in another used Light Screen. (Humorously, Misty and the others have no idea Togepi did it, though Misty suspects Togepi did it at one point).

In the episode "The Togepi Mirage!" Misty travels to Hoenn to meet up with Ash near the Route 111 Desert. Due to one of Team Rocket's plans going wrong, they end up in "Mirage Kingdom", a place where people praise Togepi for they believe it will be their savior. Togepi ends up going into a mirage, followed by Ash and his crew, to discover a Togepi Paradise in ruins. To defend it, it evolves into a Togetic, a Pokemon that makes its first (and thus far only) Anime appearance and defeats the villain of "Mirage Kingdom". It then makes the difficult decision of staying in the Togepi Paradise to protect it instead of continuing with Misty. The evolved Togepi hasn't been seen in the Anime since.

Kenechi Udeze is the English voice of Togepi.

Gold receives an egg from Jasmine's Togetics, which eventually hatched into a Togepi. 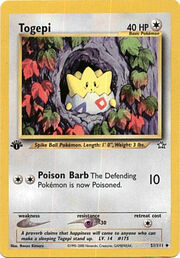 Although being a classified as baby Pokémon Togepi has made appearances as a colorless, basic stage Pokémon. Togepi has appeared in the following expansions:

As well as being a promo card in the Southern Island Series, Togepi was also available as a promo card from Coro Coro.