The first part of Togetic's name derives from the Japanese word for spike. Its Japanese name is "Togechick". The -tic suffix used in its English name may be either an intentional corruption or a mistranslation (to Japanese speakers, the morphemes ti and chi are essentially interchangeable).

In the Pokémon world, Togetic is a highly auspicious species. It is associated with good fortune and happiness, but it is said that it will grant its boons and affection only to kind-hearted, caring people. In fact, it will even grow sad itself if it is in mean-spirited company for a prolonged period of time.

Togetic's rudimentary wings do not permit it to actually fly, but it has in lost time learned to remain floating in midair without even using them. This may be connected to Togetic's potential to learn many Psychic-type moves from technical machines.

Though Togetic appears to be an angel at first glance, it shares a few characteristics with real world fowl. It is a bipedal bird-like creature of mostly white coloration. Its belly sports markings similar to those found on the shell of its pre-evolved form, Togepi. Togetic has two stubby arms, a pair of short wings on its back and three spiky formations on top of its head.

It can only be obtained by evolving Togepi by having it be very happy when it goes up a level. This means that the availability of Togetic mainly depends on the availability of Togepi. Ways to make a Togepi happy include having it in one's team, not letting it faint, grooming it and levelling it up. However, the final Shadow Pokémon in Pokémon Colosseum is a Shadow Togetic.

Togetic has excellent Special Defense and good Special Attack and physical Defense. However, it also has very low Speed and physical Attack, which makes its use of physical moves rather ineffective.

Unfortunately, it is difficult to properly utilize Togetic's strong points as its Normal/Flying combination gives it a large range of weaknesses to moves like Rock Slide, Ice Beam and Thunderbolt. Its typing also favors the use of physical attacks, which it has a very low stat for. Despite its high special attack, Togetic learns no special moves naturally, although, through the use of Technical Machines, it can be taught powerful moves like Fire Blast and Psychic. It possesses the extremely useful Serene Grace ability, which doubles the probability of moves having their additional effect work, but it can learn very few moves that have additional effects, and most of them are physical in nature. However, Metronome's ability to mimic any other move in the game allows it to work quite well with Serene Grace. Togetic's other ability is Hustle which increases attack for lowered accuracy, so never-miss moves like Swift and Aerial Ace which also get a typing boost allow Togetic to use physical attacks decently.

As a result, Togetic is not a Pokémon much preferred by players. Most suggested movesets for Togetic have it use Encore and Safeguard, assigning it a purely supportive role for the rest of the Pokémon in the player's team. It is also used as a sponge in double battles by using Follow Me to force other Pokémon to attack it, allowing its partner to use a stat up move or attack. For this, it is very useful to skilled trainers.

In the new Diamond and Pearl games, Togetic is granted an evolution (Togekiss) using the Shiny Stone, which also evolves Roselia into Roserade. Also, with the new physical, special, and other classification of attacks and introduction of newer moves, Togetic's usefulness in battle is much improved. Attacks like Swift and Silver Wind can be used by Togetic and utilize its Special stat, which is quite high, instead of its Attack, which is abysmal.

The only anime appearance Togetic made so far is in episode #321 (The Togepi Mirage). Misty's Togepi evolved into Togetic in order to protect the Togepi indigenous to the mystical Mirage Kingdom from a villain. After peace was restored, it decided to remain there in order to watch over its fellow Pokémon and Misty released it, parting with a Pokémon she has had for most of the series.

In the Pokémon Special manga, Prior to the events of Volume 9, Jasmine left two Togetic in the Daycare Centre near Goldenrod City. The egg that was born from them was passed on to Professor Elm for research, who then passed it on to Gold. The egg eventually hatched into a Togepi. 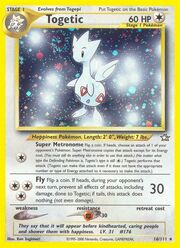 Togetic has a rather minor role in the card game. It appears as stage-1 Colorless cards in the following sets: