The player plays as Logan Keller the leader of Rainbow six. 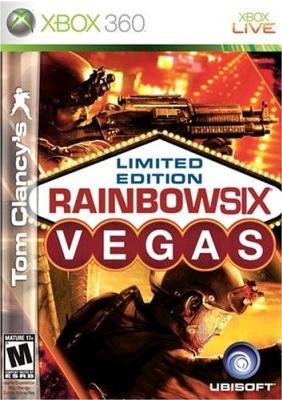 On April 18th, 2007, the Player's Pack Red Edition was released as downloadable content on Xbox Live for 800 Microsoft Points (aprox. $10.00). The pack includes two new game modes, "Assassination" and "Conquest". Three new maps were also included: "Doscala Restaurant," "Marshalling Yard," and "Roof." The maps "Killhouse" and "Border Town" have been redesigned and packaged as two new "redux" maps. The expansion pack comes directly after an update was released for the game. All original game modes and maps are intercompatible with those featured in the "Player's Pack Red Edition". It is expected that more Downloadable Content will be made available in the future, probably utilizing Xbox Live's new policy. This enables game developers to add more Achievements (up to 80 in total) and Gamerscore points (up to 1250 in total) to games that already have reached the limit of 50 Achievements and 1000 Gamerscore points. 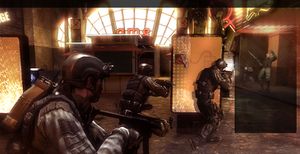 Logan Keller and his squadmates, Gabriel Nowak and Kan Akahash are in a helicopter on a mission in a boarder town in Mexico. Rainbow's Intelligence officer Joanna Torres briefs them on a mission in which they must arrest terrorist leader Irena Morales. As the copter is about to land, Logan fast-ropes down and a rocket propelled grenade was fired at the copter but misses. This caused the rest of the team to retreat to the alternate landing zone, leaving Logan behind. Logan then meets up with his squad at an old Spanish mission after walking through terrorist streets infested with terrorists. The team infiltrates a train yard and frees a group of hostages. They make their way into a mine where Irena is hiding and kill her guards. When they attempted to arrest Irena, she triggers a set of explosives which caves in the roof and buries Logan under rubble, leaving him unconscious. Gabriel and Kan are then captured by the terrorists. When Logan regains consciousness he finds his primary weapons and goggles missing. So he arms himself with a pistol and then he fights his way through an abandoned factory. Then he escapes with Jo in Rainbow's helicopter.

When Logan returns to Rainbow, he has a conversation with Domingo Chavez about the incident in Mexico. Chavez instructs Logan to handle a new crisis in Las Vegas. Logan refuses to handle the crisis and insisted to search for his lost squad mates. Chavez then tells Logan that the Vegas incident and Irena 's activities are closely related, which changes Logan's decision. Logan then reaches Las Vegas and meets his new team outside of Calypso Casino which is controlled by terrorists. His new team consists of Michael Walters, a British demolitions expert specializing in heavy weapons, and Jung Park, a Korean recon and electronics expert. The team infiltrates the casino, clears out the terrorists and rescues a group of hostages from being executed on camera. After clearing the casino, the team rescues NATO weapons researcher, Philipp Smythe and extracts with him. Smythe tells FBI agents that the terrorist has also captured another weapons researcher, Doctor Williams. Rainbow is then assigned to rescue Doctor Williams.

The team then infiltrates a Chinese restaurant named Red Lotus and clears out the building to rescue Trish Grace, a reporter who was held hostage after an interview. Trish tells the team that the terrorist are using their news van as a communications hub down Fremont Street. After the team finds the news van, Jung hacks into the system while Logan and Michael provides cover from the incoming terrorists. Michael then places a demolition charge on the van, which destroys the hub. The team is then taken by helicopter and dropped off on the Vertigo Spire hotel to rescue Dr. Williams. After rescuing Dr. Williams, he informs the team that there is a micropulse bomb in the building, and that there is a conventional bomb in another building, the bomb in the other building destroys the top floor of that building. Michael then disarms the bomb in the Vertigo, almost setting it off. The team is then extracted to locate Gabriel and Kan.

The team is dispatched to Dante's Casino which is under construction. While clearing terrorist form the roof, a near by bell tower collapses, causing damage to the building and a fire in the lower floors. In Dante's Arcade the team finds and frees Gabriel. Gabriel insists to fight along side the squad but was extracted. While searching the construction area, the team finds Kan in a firefight with terrorists. Kan gets fatally shot by a terrorist before the team could reach him. While dying, Kan reveals that the attack on Vegas is being used as a distraction from Irena's plans for a far larger attack. Kan dies in Logan's arms. The team then hacks a server in a theater and find out Irena is targeting the Nevada Dam, a hydroelectric dam on the Colorado River. The team then heads to the building and gets extracted.

The team descends onto a bridge in front of the dam. They find an engineer who tell Logan that the terrorists have planted a bomb on the bridge. The team then goes to diffuse the bomb on the second story of the bridge. Michael diffused the bomb with 3 seconds remaining. Then they fast-rope on some cables to the bottom of the dam where they enter and save a hostage. The hostage informs the team that the dam will buckle under the pressure of the lake and tells how to relieve the pressure. The team relieves the pressure by using the emergency release valve. The team then finds a weapons research lab inside the dam where the terrorist are creating a micropulse missile on top of the dam. Logan finds Irena Morales, confronts her, and then shoots and kills her. While dying, Irena taunts Logan by telling him her partner will continue the fight against Rainbow. The team heads to the top of the dam where they plant a demolition charge on the missile and detonate it in mid-air, without releasing the micropulse payload.

If Logan does not shoot down the helicopter Logan comments that they need to find out who was behind Gabriel and Irena's terrorist operations and then the credits roll.

If Logan shoots down Gabriel's helicopter the player will see the chopper crashing and the game end with Logan commenting that they need to find out who was behind Gabriel and Irena's terrorist operations and a "To Be Continued" screen appears. Then the news reports that a chopper has crashed and only the body of the pilot was found, which shows that Gabriel may have survived and that Las Vegas was saved. The credits then overlay the news report.

Unlike the PlayStation 3, Xbox 360, and Windows editions of Rainbow Six Vegas, which all received Mature ratings from the ESRB, Rainbow Six: Vegas for the PSP received a rating of Teen. The PSP version supports up to four player online play, over either ad-hoc or infrastructure. Some of the maps include Presidio and Street from Rainbow Six 3 and Rainbow Six Vegas. The plot on the PSP version a similar, or parallel, story to the versions of home consoles. It follows the story of Brian, a rifleman, and Shawn, a sniper, two up-and-coming Rainbow operatives.

GameSpot, and IGN are the only major reviewers to have released a review to date, giving the game a score of 6.8 and 5.5 respectively. They state that although it is a "solid PSP shooter", its graphics can be bland, and the audio occasionally skips. Metacritic currently shows an overall score of 59/100.

As the player progresses through online play, his/her character gains experience points after every match, and rises in rank. There are ten enlisted ranks and seven officer ranks. All together there are seventeen total ranks. When players rise in rank, they will unlock new equipment and weapons, intended to offer more options for customization without putting novice players at a disadvantage. There are currently ten multi player game modes; Survival, Team Survival, Sharpshooter, Team Sharpshooter, Retrieval, Co-op Terrorist Hunt, as well as four new modes, Attack & Defend, Co-op Campaign, Assassination, and Conquest. Multi player mode supports up to sixteen players, when "Dedicated Server" is selected during the match creation process, the host can sacrifice his ability to play and dedicate his connection fully to the other players to improve overall connection performance and reduce lag issues. With the use of the Dedicated Server option, up to sixteen players can compete in one match, excluding the hosts presence. Hosting a match on a Dedicated Server with all sixteen players also unlocks an achievement called "Master of Ceremonies" for the game. Each mode can also be customized, by changing options such as the number of respawns each player gets and restricting certain equipment and weapons.