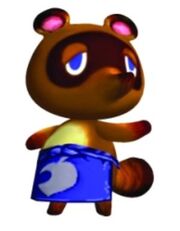 Tom Nook as he appears in Animal Crossing.

Tom Nook is the owner of Nook's Cranny in the video game series, Animal Crossing. Tom Nook helps with getting the main character their initial home, which costs a lot more than your character can afford. He forces the player then, to work for him at his store. He has various tasks for the player. He likes to joke about things and gets flustered when things don't seem to go the right way. Later in the game, Sable and Tom Nook reveal they knew each other - long ago. While your character continues to payback the money to Tom Nook, he upgrades your house...for even MORE money then the previous upgrade. When he gets enough money, he'll eventually upgrade his store - offering more items for the player to buy. When the player has Tom Nook at his final upgrade, Nookingtons, his nephews, Tommy and Timmy come live upstairs in his store. Tom Nook seems upset that they are there, as they are always causing mischief around the store. As of Animal Crossing: New Leaf, Tom Nook runs a home renovation business, appropriately named "Nook's Homes". He is now working directly in affiliation with Lyle and the Happy Room Academy.