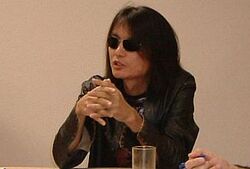 Itagaki is still trying to look like a rockstar

Tomonobu Itagaki in the creator of the Dead or Alive franchise and works within Team Ninja, a division of Tecmo, and has the title of Team Ninja Leader. Itagaki is also well known for the remake of Ninja Gaiden, an exclusive title for the Xbox.

Itagaki joined Tecmo in 1992 as a graphics programmer, and initially worked on the Super Famicom/SNES version of Tecmo Super Bowl.

Itagaki is also known for his sharp criticizm of other franchises, developers, designers, and just about everything else within the video game industry.