Top Gear 3000 (known as The Planet's Champ TG3000 in Japan) was a sequel to the 1993 video game Top Gear 2 for the Super NES. It is a racing game similar to the original in gameplay, but set in the distant future with 47 different tracks on alien planets, and a variety of environments.

Placing this game a thousand years in the future allowed the developers to plausibly include futuristic and improbable technologies, and abandon the relative realism of Top Gear 2.

Car upgrades were more extensive than in Top Gear 2, and "weapons" were featured for the first time in the series. Upgrades included a nuclear fusion engine, a cobalt-titanium armor kit, and a liquid polymer gearbox; weapons included a device to jump over cars, a warp device, and a magnetic attractor to steal kinetic energy from other cars.

Due to the capabilities of the new chip DSP-4 used for this game, it was the first game in the series that was possible to split the track in two different directions with different lengths, sometimes intentionally making one route much faster than the other. Top Gear 3000 was the only game in the history of the Super NES to use this chip.

The introduction states that anonymous benefactors and funders have created a massive galaxy-wide racing campaign at the outset of each millennium,[3] and reward the winner with "riches beyond belief."

However, the instruction manual would point out a more dystopian story that wasn't reflected in the introductory sequence of the video game itself.

The year is 2962 (and not 3000 as shown in the title of the video game).[4] Five centuries have passed since World War XVII devastated most of the colonized planets of the Milky Way Star System.[4] The Galactic Conglomerate of Unified Planets, controlling the Bureau of Reasonable Entertainment, has maintained an era of calm and peaceful co-existence through the systematic suppression of any radical thought or action that may "stir up" the teeming masses of citizens populating the twelve Star Systems under their jurisdiction.[4] In other words, anything remotely resembling "fun" has been analyzed, sterilized, sanitized, homogenized, pasteurized, desensitized, computerized and commercialized.[4]

And so are a number of outlaw thrill seekers that have too much money and not enough excitement in their lives to keep them occupied.[4] For these radical elements, there is only one cure for the boredom and complacency of life in the 30th century...The Top Gear 3000 Challenge![4] Once every millennium, the richest, bravest, most skilled drivers risk it all in the ultimate car race.[4]

Combining the high tech, sci-fi gadgetry of the 30th Century with the white knuckle, raw nerves action of 20th Century automobile racing, these bandit racers have set up an illegal tournament that will take you hurtling through the planets of the Conglomerate.[4] 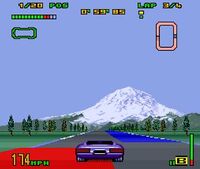 Car going on a red Recharge strip. At the right, a blue Repair strip.

The game has two distinct modes of gameplay, with Championship being the most expansive. Cars are limited by the range of their fuel, and of the condition of their frame; players gain fuel by driving over the red Recharge strips, and repair their car's structural integrity by driving over the blue Repair Strips.

In Championship mode, one or two players can play, or one player can play with the screen split between his/her view and that of an AI opponent. Players start off with identical cars and may change the color, name, speed units (MPH or KPH), and the button layout. Unlike in previous Top Gear games with a few pre-generated layouts, the players may adjust any function to any button desired.

Each race contains a pack of twenty cars, with eighteen or nineteen named AI opponents. After races are won, players then spend earned credits replacing the engine, gearbox, tires, armor, boost, and adding "weapons" capability. The AI opponents do not purchase upgrades, but grow steadily faster throughout the championship. Bonuses of various quantities may be placed on the track as spherical icons, or awarded for certain driver activities after the end of each race as secret bonuses. These bonuses are:

Some races intentionally have less than minimum recharge strips, forcing the player to run out of gas. As the cars are futuristic, the cars can sustain a great speed even without gas, making it possible to win races without recharging. But if the player hits a tree or another object that makes the car lose too much speed, the car then will run at a very low speed, almost not moving. The only way to make the car gain speed again is by running over a red strip, using the attractor on another car, being hit by a fast car or using a boost of level 4 or higher. As well, nuclear engines can keep the velocity even when the player doesn't have gas.

The weapons do not influence the other racers at all. You can jump over other cars, warp through other cars and even attract your car towards another, but these weapons only affect your car. The player can cycle between the weapons using the L or R trigger buttons.

In Versus Mode, up to four players can play with the addition of a multitap. The screen is always split four ways; if there are fewer than four players, AI opponents will form up the remainder. Each race is a stand-alone affair on a single track, with players choosing from four different speed/acceleration/boost combinations (similar to original Top Gear) before the race begins.

Top Gear 3000 employs a password system which allows the player to resume gameplay after switching the console off. It restores all purchased upgrades and championship status. The password system can also be used for cheats, a common one which uses a B for every slot (BBBB BBBB BBBB BBBB BBBB B) to give the player millions of credits which then allows for all upgrades to be eventually purchased as they are developed. The game defaults to medium difficulty, which means that not all upgrades are ever developed. It begins at the second race. Other password cheats do exist.

There are 47 tracks in Top Gear 3000. In Hard difficulty, every track is run, but in Easy and Medium, some of these tracks are skipped entirely. Every world contains a description on the weather conditions, but this doesn't affect the race, except for Night and Foggy races, where the visibility is decreased. 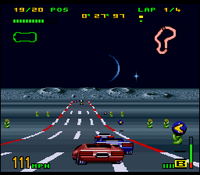 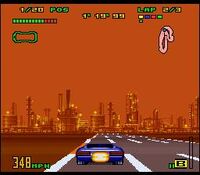 Nintendo Power gave it a contemporary rating of 3.2/5.[5]