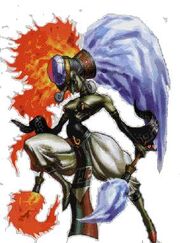 The true form of the two witches Koume (fire witch) and Kotake (ice witch), Twinrova is a Gerudo queen and witch that harnesses the power of fire and ice magic. She is described as being Ganondorf's "surrogate" mother. This implies that the fatherless child was seeded from dark magic.

Twinrova is the second to the last boss in all two (or three, depending on how you look at it) games that she appears in. In all the games, you first have to fight her in her Koume and Kotake form. In this form, you deflect Kotake's attacks to Koume, and Koume's attacks back to Kotake. In the second phase, you'll have to deflect Twinrovas attacks back to her to stun her, then attack her with your sword.

Every adult female in OoT (with the exception of Malon and Zelda) looked like a total whore.

Sisters, doin' it for themselves!

Koume and Kotake appear in Majora's Mask as good witches that make potions, but their merged form of Twinrova is absent from the game.