Unlike Cyndaquil, Typhlosion bears no relation to the echidna, instead resembling something of a wolverine or badger. Its body is heavy, but despite that, it's capable of obtaining incredible speeds. The number of special vents it possesses has dropped to the row on its upper back; however, it can put forth a tremendous amount of heat. Typhlosion could also resemble a lion because of the ring of fire around its neck much like a mane. Typhlosion carries the same coloration of its lower forms. Its yellow fur is brighter than it is on Quilava, yet still duller than Cyndaquil. Its fur is incredibly coarse and somewhat shaggy, but it is still fire-proof.

Far more aggressive than either Cyndaquil or Quilava, Typhlosion are exceedingly hard to find out in the plains. They are a known cause of grassfires as the heat they expel is hot enough to cause the air around them to shimmer. It viciously assaults its opponents, reducing them to ashes from its incredibly hot fire.

Though not color-blind, Typhlosion have slightly poorer eyesight than Quilava due to smaller pupils. It makes up for this by possessing a keen sense of smell and remarkable hearing. Capable of moving equally well on either two feet or four, it can also make incredible leaps to attack opponents from above. In battle, this Pokémon uses stealth and cunning abilities to make the foe faint.

It has the highest stats of any other fully evolved Johto starter. Typhlosion is a Pokémon with good Special Attack and Speed, while Feraligatr specializes in HP, Attack, and Defense. Meganium has high Defense and Special Defense.

Typhlosion's Speed and Special Attack mean it can work well in competitive battling, though it is often overlooked in favor of Charizard due to Charizard having exactly the same stats but a superior movepool. It is one of the speediest Johto Pokémon in the game, and is thus the most useful for rushing the opponent's Pokémon quickly. While having low Defense, Typhlosion can hit the enemy first with its outstanding speed. This has been very useful to some trainers in Pokémon Silver and Gold who have high level Typhlosions as they teach them Flamethrower, Earthquake, and Thunderpunch to make in nearly unbeatable.

Interestingly, of the four generations of Pokémon to date, Typhlosion is the only Fire-type Starter Pokémon, at its third and final stage of evolution, to be a pure Fire-type (Charizard is Fire/Flying, Blaziken is Fire/Fighting, and Infernape is also Fire/Fighting). Another interesting fact is that Typhlosion learns Eruption through Level up in the Fourth Generation, previously, it was exclusive to three Pokémon alone (Groudon, Camerupt and Torkoal, Torkoal via breeding only)

Typhlosion is Jimmy's partner in The Legend of Thunder, the three-part first episode of Pokémon Chronicles. This special aired in early May, 2005, in the United Kingdom. This special has since aired in America.

Typhlosion was also used by Mr. Moore, Flannery's Grandfather during the fight with Team Rocket in "Poetry Commotion". Typhlosion also sparred with a Feraligatr in a cameo in "Gonna Rule the School".

Gold's Quilava evolved into Typhlosion to protect Silver, Crystal, and himself from Lugia. 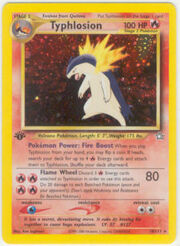 Typhlosion has eight strong stage-2 Fire-type cards under its name, and they are found in these sets:

In EX Unseen Forces, Typhlosion is card no. 17/115 (rare), and comes in three different versions. The set lists two holo cards (regular and reverse, bearing the Unseen Forces logo over the art), but there is also a non-holo version of card no. 17. Typhlosion (Stage 2; 110 HP) evolves from Stage 1 Quilava. The set also includes Typhlosion EX as card no. 110. Typhlosion the a stage 2 starter Fire-Type Pokémon in Pokémon Versions: Gold, Silver, and Crystal. You may choose from Chickorita(Grass), Totodile(Water), and Cindaquil(Fire) in the Johnto Region Pokémon games.