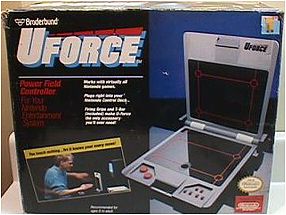 The U-Force is an accessory for the Nintendo Entertainment System made by Broderbund. It employed 2 large infrared sensors and a series of switches allowing the user to program it to recognize movements across the sensors as button presses and send those corresponding signals to the NES.

The U-Force also featured an attachable controller with handles and the A and B buttons. Below the buttons were infrared sensors.

From a print advertisement circa 1989:

"Introducing U-Force, The Revolutionary Controller For Your Nintendo Entertainment System. So Hot, No One Can Touch It. Now you can feel the power without touching a thing. It's U-FORCE from Brøderbund--the first and only video game controller that, without touching anything, electronically senses your every move. And reacts. There's nothing to hold, nothing to jump on, nothing to wear, U-FORCE creates a power field that responds to your every command--making you the controller. It's the most amazing accessory in video game history--and it will change the way you play video games forever. It's the challenge of the future. U-FORCE. Now nothing comes between you and the game."