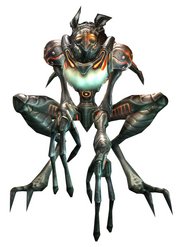 He also has excellent hearing. 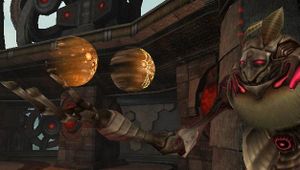 U-Mos can apparently generate holograms in his hands.

The last remaining Luminoth on Aether. The rest of his species is dead or frozen in cryostasis. When it became clear to the Luminoth that they were fighting a losing battle against the Ing, they sealed themselves away to await the warm or cold hands of fate, whichever they might be.

U-Mos is left awake so that he might take care of the Luminoth in stasis, acting as a guardian protector for his entire race. Luckily for him, Samus Aran showed up on the tail of a distress beacon and was able to accept the charge of saving Light Aether from certain destruction.