Ultimate Spider-Man is a sandbox like Action game for nearly every platform. It copies the successful free-roaming open New York formula Spider-Man 2 had, but with changes to the cityscape and web swinging mechanics. There is a Limited Edition version of the game, which cost US$10.00 more, but features a Venom-based cover and a DVD featuring behind the scenes interviews and information.

The game is based on Marvel's Ultimate Spider-Man comic, which re-imagines and updates the classic Spider-Man story. The dialogue was written and the voice actors were chosen by Brian Michael Bendis, the well-known writer of the comic. Bendis even hand picked the voice actors, to ensure that it matched with his vision. Meanwhile, the art is based on Mark Bagley's designs, who is the regular artist. Because of this, the events and story of the game are considered canon in the comic, and can affect future stories.

The game gives you a very comic stylized, smaller version of New York to explore in traditional, non-linear sandbox style. There are random missions scattered throughout the city that are triggered simply be going near them. Things like stopping gang fights, saving people hanging off of buildings, delivering people to hospitals, or beating up various criminals. There are even tokens hidden throughout the cityscape to collect, which, when gathered, will unlock different comic book covers, costumes, and much more. Finally, there are optional combat tour & race missions scattered everywhere.

To progress the story (thereby unlocking new moves), you must do a checklist of these missions (for example, one combat tour and two races) before you can go to a "beacon" point where a cut scene occurs. Sometimes, this is where you switch off into controlling Venom, who cannot free-roam to do any mission as Spider-Man can, but is confined to a much more linear "level" where an ending must be reached. When the game is completed, he is able to free-roam the city, but even then, his options are limited to races, killing random civilians, or trying to get a destruction "high score" as enemies progressively get harder.

Since you are able to play as both Spider-Man & Venom Spider-Man is a much faster character capable of web-slinging and many different moves. Venom cannot web-sling from building to building, but can instead "super-jump" similar to the Hulk in The Incredible Hulk: Ultimate Destruction. This is essentially a really, really, high jump that lets him clear buildings in a single bound.

Venom is also more brutal. When Spider-Man defeats thugs, he must web them to the ground to ensure their defeat. Venom can't web them up. He can either absorb them into his body and take their health to add to his own, or kill them. Innocent civilians give him more health than army bad guys. His moves include faceplants, throwing heavy vehicles (which Spider-Man cannot do) and breaking backs in two. 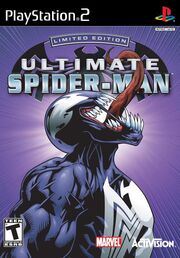 The gameplay design is based on the movie-based game, Spider-Man 2, but features many singificant changes. The area, New York, is much smaller with many fewer towering skyscrapers. However, the environment is much more varied, including distinctly different areas such as docks and suburbs. In Spider-Man 2, 90% of the city was the same old blocks and blocks of giant concrete buildings.

Webslinging has been made slower and easier in Ultimate Spider-Man. Players need only to use one button instead of alternating between a sling and a jump. Spidey can also climb up the web, as well as boost. However, he can no longer charge his jump, which is replaced by a double jump.

Combat has also drastically changed. In Spider-Man 2, combat was very close-quarters and flashy. In Ultimate Spider-Man, players that jump around, bouncing off walls and constantly switching targets (Much like Spider-Man in the comics) are rewarded with more damage. Additionally, some moves no longer exist, such as the piledriver, or the extended web rodeo.

The graphics are have a colorful, cel-shaded style based on the designs by comic artist Mark Bagley. To keep the "comic book" feel going, the cut scenes are told in fast paced, highly stylized animated panels. Sometimes, lettering appears during sound effects for added effect. It has been praised by many critics for it's accuracy to the style, which immerses players in an authentic comic book world.

The story, written by Bendis, directly plays off of the established Venom origin and encounter in the Ultimate Spider-Man comic book. It features many cameos, from Wolverine of the X-Men, Jonny Storm of the Fantastic Four, and villain Silver Sable. It tells the story of Spider-Man trying to live his life, while dealing with the mysterious return of an out-of-control Eddie Brock, consumed by the Venom suit. He is also mysteriously suffering from painful, overwhelming Spidey-Sense whenever he is near.