Umbreon (ブラッキー, Burakkī, Blacky in original Japanese language versions) is one of the 493 fictional species of Pokémon from the Pokémon Franchise – a series of video games, anime, manga, books, trading cards and other media created by Satoshi Tajiri.

Umbreon is a Dark-type Pokémon and one of the seven Eevee evolutions, the others being Jolteon, Flareon, Vaporeon, Espeon, Glaceon, and Leafeon.

Before the Advanced Generation of the Pokémon series, Umbreon was the only pure Dark-type in the games, giving it fewer weaknesses than dual-type Dark Pokémon, such as Houndoom or Murkrow.

Umbreon's name comes from the Latin word for shadow, umbra and the -eon suffix which is common to, though not exclusively shared by, all names of Eevee evolutions. Its Japanese name, Blacky, is a reference to the color of Umbreon's coat as well as its Dark-typing.

The drawing and sprite design of Umbreon was created by Ken Sugimori for its 2001 release on the Game Boy Color.

Umbreon is a quadrupedal mammal that has characteristics of foxes and cats, but is about the same size as the gray wolf. It is covered with short black fur, with yellow rings on its legs, tail, ears, and forehead. The rings will glow when it leaps to attack. Its eyes are blood red with black pupils, and it can spray poison sweat from its pores. Umbreon also slightly resembles a cat or a jackal. Eevee may evolve into Umbreon as a result of love for its trainer and the moonlight. It prefers to lurk in darkness while waiting for its opponent to make the first move. Forcing it to walk during the day will cause stress. During the night of a full moon, or if Umbreon becomes excited, its yellow rings will glow, a sight that will strike fear into the hearts of those nearby.

Umbreon cannot be caught in most of the Pokémon games. It must be evolved from Eevee by leveling it up while nighttime in Generations II and IV and from 12:00 AM to 12:00 PM in Generation III, after its happiness is very high, or by using a Moon Shard (not to be confused with a Moon Stone) in Pokémon XD: Gale of Darkness. Therefore, Umbreon's availability depends directly on the availability of Eevee. The single exception to this is Pokémon Colosseum, in which the player starts with both Espeon and Umbreon. Umbreon was the only pure dark type Pokémon of the 2nd generation, meaning it was the only one which did not suffer from the weaknesses of dual types, making it preferable above other dark types.

Because Pokémon FireRed and LeafGreen do not make use of internal clocks, Eevee cannot evolve into Umbreon in these games. It must be traded to a Ruby, Sapphire or Emerald where it evolves after leveling up during PM hours with high happiness, or transferred to Pokémon Diamond or Pearl where day and night cycles return, to evolve it.

Umbreon's above-average Defense, Special Defense, and HP make it a statistical tank; however, it has recently fallen out of favor due to how easily other, more powerful Pokémon use it for setup. One common Umbreon strategy uses it's defensive abilities and it's ability to use toxic to stall while the poison takes effect.

Gary's Eevee evolved into an Umbreon some time before Power Play.

Umbreon also appeared in Trouble's Brewing and Espeon Not Included under the ownership of one of the Kimono Sisters.

Umbreon, as well as many of the other Eevee evolutions, have been overlooked in the Pokémon Adventures manga. One Umbreon has been controlled by Karen of the Johto Elite Four, who later joined Neo Team Rocket, the secret organization headed by the Mask of Ice, the alter ego of Johto Gym-leader, Pryce. Another Umbreon was controlled by Greta of the Battle Arena used to fight against Emerald. 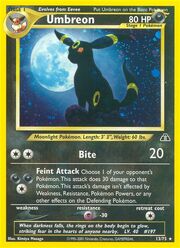 There are currently ten Umbreon cards available outside of Japan:

Umbreon's consistency in types has led to it always having the same weakness: Fighting-type Pokémon (although the Neo Discovery versions had no weakness at all). As well as that, it has always had a resistance to Psychic-type Pokémon. In fact, the only set in which Umbreon's type is not the same as in other sets is EX Delta Species, in which Umbreon is a Delta Species Pokémon and so has Metal as a secondary type. As it is also a very agile Pokémon, its Retreat Cost is always one. It also always has 70 or 80 Hit Points, and the only Umbreon card with more is Umbreon ex (pictured right), which has 110 HP.