From Codex Gamicus
(Redirected from Unirally)
Jump to: navigation, search

Uniracers (Unirally in PAL territories) was developed for the SNES in 1994 by DMA Design (Now Rockstar North). It was published by Nintendo, and marked a rocky relationship that created highly sophisticated games that fell short of commercial success (see DMA Design.).

The Uniracers Story (Taken from the SNES manual)[edit | edit source] 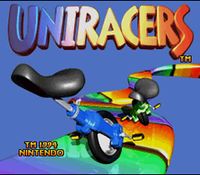 The Sun didn't rise, the Moon didn't set. Fluffy clouds failed to make any sort of appearance and the night wasn't dark and stormy. Nobody was silhouetted against a backdrop of stars and the burning fires of the dawn sky somehow never had a chance. There were no such things, you see. Not in the Universe of the Uniracers. But heck, that's the way it goes sometimes. There were far more important things to work up a sweat about than some pretty scenery. Racing for one thing, for another.... well that was it, just racing. It was the whole purpose of the Uniracers. And it happened sort of like this:

Far in the past, or what passed for the past, some great and powerful person looked across the abstract Universe and realized that his boredom went right off the scale. He was through with creating a planet here, an asteroid there. What's more he was trying to impress a young goddess who thought that he lacked a creative imagination. After all, you can only say kind things about a newly created world so many times without giggling. This wasn't a fun situation for the person, as you can well imagine. So after a timeless interval locked in the celestial equivalent of a cupboard, with an endless supply of Turbo-Strength Coffee, he came up with the idea of a race of Unicycles who would compete in the ultimate games! What's more, it would really break the ice at parties. Such is the legend told by Unicycles when they slow down enough to talk to each other (well sometimes), although no-one seems to know whether the Person actually won over the young goddess and lived happily ever after. In fact if you stopped a Unicycle and asked, you'd find that none of them really cared. It's RACING that's the thing.

So the Uniracers came into being and, boy, were they racing machines or what?!?! An entire race of dedicated cycles. Sure enough they got right into their role and raced all the time in the abstract days and neon nights of their Universe. And so it went for a long, long time. But there is something else, too. Even when a Unicycle couldn't find a racing partner, out of the abstract blue would turn up a Ghostly cycle to provide a race by which to measure themselves. The Ghosts never talk, never hang about to see what happens. Some call them the free spirits of cycles that lost important races and were condemned to race forever to prove themselves. Others claim that they are the personal cycles of that old Person, used to make sure the rest of them keep on track. And at the very end of the "day" in whispers, is told the tale of the Anti-Uni, the ultimate racer whom no-one can find, no-one but the very greatest of all. Become the very height of racing excellence and the Anti-Uni will come to challenge you... 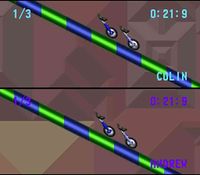 Andrew ahead by a fraction of a second.

Uniracers, undoubtly, features one of the strangest designs concepts in gaming. Imagine making a racing game, but with no cars, and in 2D, highly stylized (read abstract) graphics, and heavy emphasis was placed on performing stunts. The gameplay of Uniracers involved racing unicycles around a 2D track. The stunts gives the unicycle a boost of speed on the track (the justification in the instructions was that aircrafts are faster than cars, therefore a Uniracer airborn is faster than a Uniracer on the ground, simple huh?) or earn points on stunt tracks.

Stunts in Uniracers were relatively simple, with four major moves: Twist, Roll, Flip, Z-Flp. A Twist is a 180 spin on the Uniracers' axis; a Roll is a forward 360 spin; a Flip is a backward 360 spin; and a Z-Flip is err... a Z-flip (The Manual never explicitly said what a Z-Flip was, but it's a 180 flip putting the Uniracer upside down, with the seat facing the ground and wheel up in the air.). The idea was to be able to perform these stunts quickly in tight situations while landing the unicycle on its wheel to avoid wiping out. The speed boost/score multiplier is exponential to the tricks pulled, which means that a longer (hence more difficult) string of tricks will give a bigger speed boost or a higher score. In essence, it is the same risk for reward game mechanics that almost all extreme sport games share today.

The game featured nine tours of five tracks each (two race course, two circuit course, one stunt course). A race course is a simple "point A to point B" race; A circuit course is closed circuit race with a predetermined number of laps; A stunt course is a track designed for a high score stunt competition. Beating each of the first eight tours (Crawler, Shuffler, Walker, Hopper, Jumper, Bounder, Runner, Sprinter) required defeating computer-controlled opponents for each of bronze(Bronsen), silver(Sylvia), and gold(Goldwyn) ranks. The last circuit, Hunter, featured the Anti-Uni as the computer-controlled opponent. During that tour, touching the Anti-Uni caused all manner of odd effects to take place, from the track becoming invisible, the controls reversing, the background no longer moving in sync with the action, and other strange things.

Split-screen two-player modes were available as well, including a league mode that allowed up to eight players to compete in one-on-one races. The level of statistical tracking was fairly impressive for its time, tracking and comparing scores and times between sixteen players at a time.

Since the uniracers are moving at blindingly fast speeds, and the 2D view shows a limited path ahead. The developers created a colour coded system on the track to warn the players of what lies ahead.

BLUE and GREEN - Normal track. Nothing is going to happen for the immediate future. Keep on doing what you are doing.

BLUE and RED - If the red stripes are spaced far apart, the course is about to change in direction. DON'T JUMP! If the red stripes are close, the track is going to make drastic changes (big hill climbs or drops), so DON'T JUMP! BLUE and YELLOW - This could means three things, either you are approaching a short cut (you should look out for one); or you are on a short cut (you'll know if you are on it), or you are approaching the finish lin (which the pattern will turn into a checkered black and white colour)

SOLID YELLOW BAR - The track is about to end, and there is a shortcut. Do you have to jump to get to the shortcut? You decide.

RED & YELLOW - Two things: a) Either you shouldn't be here (They put these tracks here to prevent you falling from infinity.) or b) There is a hazard right ahead (sticky goo), so figure out a way to avoid it.

METALLIC BLUE STRIPES - It's a corkscrew, don't jump onto it, you'll get bounced out.

As mentioned before stunts are worth a certain amount of points. Here is a chart detailing the scoring system.

This will be the amount of points you will get the first time stunts are executed, and point values decreases in half the next time stunts are executed in any given race (except Tabletop, which does not decrease in points). Each time you execute and land a stunt, the Unicycle gets a speed boost proportional to the point value the stunt has, therefore a bigger stunt will be rewarded with a bigger boost. 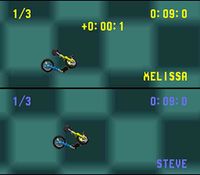 Steve is doing a Roll

When Nintendo contracted DMA to create Uniracers, they were hoping to beat Sega with a faster feeling game than Sonic. Hence, it's no wonder why DMA included two easter eggs with the username entry:

Enter SONIC or SEGA as a player name. Also, any curse word will incite the "Not cool enough" remark.

Another possible anti-Sega/Sonic egg can be seen in the race vs. Anti-Uni. One of the special effects causes the race to slow down to a molasses-like pace. This is called Hedgehog Mode, though whether this refers to Sonic directly or not is unclear.

At one point in late-1995/early-1996, Nintendo Power listed Uniracers 2000 as a game in development for the Nintendo 64. However the title was never mentioned again, and was presumably cancelled.

Uniracers' design was not totally abandoned, however. In 1998 Acclaim released Iggy's Reckin' Balls, a "vertical racer" in which players racer across a 2.5D race track. Iggy's Reckin' Balls is considered to be more puzzle oriented, but many players also consider it to be the spirital successor to Uniracers.