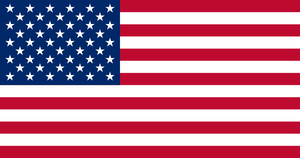 The United States is the most technologically-advanced faction, and fights with a combination of powerful ground units and a large, versatile fleet of aircraft. USA forces rely on skill, mobility, and high technology to defeat the raw firepower of China and the guerilla tactics of the GLA. USA ground vehicles can construct unmanned drones to support and repair them in combat, and American troops and vehicles make extensive use of laser technology to guide weapons and defend against attack. American infantry have a number of special abilities, and include long-ranged snipers and a powerful commando named Colonel Burton with a number of abilities revolving around demolition and stealth. The USA also fields the largest air fleet in the game, including attack helicopters, fighter planes, high speed bombers and stealth bombers. American Generals' abilities revolve around air power, including air strikes by A-10 Warthogs and fuel air bombs.

The USA has a major disadvantage, however, in that it has the slowest resource gathering in the game, in comparison to troop costs, it has a less stable supply of power than China, and its high-tech units are very expensive. This forces a USA player to construct a smaller, more specialized army than a Chinese or GLA player, and work to minimize losses. Chinese and GLA opponents can easily swarm a small American army and overwhelm it.

Background: The son of an Iowa crop duster, General Malcolm Granger's flying career began at the age of 12, when he borrowed his father's biplane to go to the state fair in Kansas City. As a lieutenant in the Vietnam War, Granger became an ace in a single afternoon, knocking out four MiG-17s over Da Nang. As he moved up the Air Force ranks, Granger earned a reputation for advancing the role of fighting aircraft in the U.S. military. Even-tempered yet uncompromising, Granger has developed novel techniques in fuel management and resource deployment during air superiority operations. Those techniques have been used with success in Iraq, Afghanistan, and other theaters. His squadrons are known for precision execution and a strong will to complete the mission.

Background: A logistics staffer in Okinawa, Alexander attracted the notice of her superiors with her ability to acquire just about anything. Alexander parlayed that ability into a scholarship and a long and distinguished career in the Marines. To protect supply lines during the first GLA conflict, Alexander developed a tiered scheme of defenses that did not allow a single strike on any of her supply columns. While hardly efficient in her use of resources, General Alexander makes defense and resource acquisition priorities in the early phases of conflict. The general's army takes to the offensive only when she has superior offensive firepower that cannot be touched by counterattack.

Background: An early champion of laser technology in the USA Armed Forces, "Pinpoint" Townes has developed comprehensive offensive and defensive strategies for the 21st century around laser-based weapons. It is only in recent years that powerful lasers became cheap enough and light enough to mount on battlefield weapons, and General Townes has deployed them throughout his forces. This four-star general continues to push the technology envelope in harnessing energy and improving power efficiency, and the Army is counting heavily on him.