Unreal Tournament is a multi-player-centric first-person shooter released in 1999 by Epic Games. The game is based around tournaments that prisoners are put through in the Unreal universe. 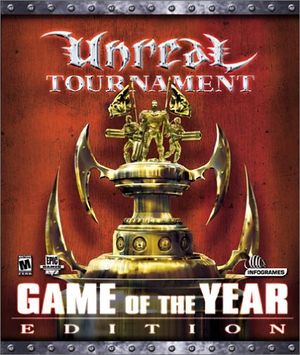 Unreal Tournament: Game of the Year Edition or UT GOTY was released in the year 2000 and is widely regarded as one of the greatest online multiplayer first person shooters of all time. UT GOTY included a disc containing the game itself and a second disc containing some bonus maps, new models (such as the Nali Warcow), and mutators such as relics and professionally-polished versions of the Chaos UT and Rocket Arena game types. Although all of the material on the second disc (about 50 MB) can be freely downloaded, the price of the game is cheap enough for gamers with slow internet connections .

In single player mode you are first able to choose your character and the skill you desire. The type of character you choose will determine which team you are on in the Capture the Flag tournaments. After choosing your character you are able to play Deathmatch.

The objective of Deathmatch is to be the first player to reach the frag limit. The player is up against everyone else and all other players are your opponents.

Same as deathmatch, but there are teams.

The objective is to take the enemy's flag and return it to your own flag post a certain number of times.

This game type is among many peoples favourites. It requires strategy, instead of running out and gunning your opponents. There are 2 roles, the attacker or the defender. If you start as the attacking team, you must complete a number of objectives, while defending yourself. Once all objectives are complete the game restarts, and your team switches roles. Then the opposing team have to do it. The fastest time wins. But if you are the defender, your job is to stop the attackers from completing their objectives.

The objective of LMS is to be the last one standing - with the most lives left. Basically the players hunt each other down and must not run out of lives.

Unreal Tournament is primarily an online multiplayer game and in its heyday it was possible to find thousands of people playing it online 24/7. Hundreds of clans were formed and they competed in leagues and on organized ladders, often using voice-over-IP communication programs such as Teamspeak, Roger Wilco, and Ventrilo. Players also communicated via Internet Relay Chat. Because UT99 was very popular, thousands if not over ten thousand custom maps and game modifications were created which would auto-download to players upon joining servers. The ease with which custom material could be created and distributed contributed to the game's success. As of the week of October 4, 2009, at around 4 p.m. U.S. Eastern Standard Time, over 800 players were counted in the server browser.

Many members of the Capture-the-Flag' community enjoy playing pick-up game (aka PUG) matches. The name "pickup game" really means "pickup clan-match-style game", which means that the game will feel like playing a formal clan match as opposed to playing on a public server where players join and leave the teams in the middle of maps. PUG matches also make use of voice comm, with each team joining a separate chat channel on a Teamspeak or Ventrilo voice-over-IP server. Most pugs are for 5v5 capture-the-flag games and are often played by people who used to be members of the clan community. Normally, 10 people on an Internet Relay Chat (IRC) server spontaneously "join the PUG", which is managed by a program called the pugbot. Players can join by either changing their nickname to have a certain letter in front of it or by typing .join depending on what pugbot program is in operation. (So if the letter is y, then a player named Bigfoot would change his name to y-Bigfoot to join). When ten people have signed up, two people become team captains, either by typing in a designated command or by being randomly appointed by the pugbot, and then they proceed to draft-pick the other players in an A-BB-AA-BB-A draft order so that the first captain has both the first pick and the last unpicked player.  The players then join a Teamspeak voice comm server and join the PUG game server itself where they play a 5v5 best-of-three-maps match. Like a clan match, players have assigned positions (i.e., flag defense, offense, middle, front door defense, etc.) and teams try to cover their flag carriers. It is a tremendous amount of fun and the game experience is more intense than playing on public servers. To get started, you need to obtain an IRC browser program such as mIRC or the Firefox plugin Chatzilla. You can find the UT99 CTF pug match communities on these IRC servers:

For North American PUG matches come to irc.GameRadius.net and then join channels #speedpug (125 speed regular weapons) and #mlut (100 speed regular weapons). #Mlut (Major League Unreal Tournament) is the home channel for the pro community and you need to be registered with and logged into the Gameradius server in order to join it (instructions available at www.GameRadius.net). Note that new channels do form occasionally and that activity might shift from one channel to another, so just ask around to find the currently active pug channel. (Alternatively, use your IRC browsers channel list feature to find out which channels are heavily-populated and then investigate.) Other channels exist for other game types such as Instagib and Sniper, and some channels are passworded. New North American players are advised to first try #speedpug where they are more likely to be welcomed by the other players. In Europe the IRC server is irc.Quakenet.org and you might try channels #ctfpug and #ut994funpug.