Ursaring(リングマ, Ursaring? Ringuma in original Japanese language versions) is a bear Pokémon that evolves from Teddiursa. It is the larger of the two bear Pokémon (three if you count Spinda).

Ursaring's name is composed of ursa (the Latin term for bear) and ring (a reference to the ring upon its belly).

Its Japanese name is Ringuma, a portmanteau of the English word ring and the Japanese word guma, a form of kuma, which is Japanese for bear.

Although it is large, it is actually an arboreal pokémon, able and willing to climb trees and sleep in their caves. Its claws are somewhat modified from a real-world bear's for this task. Like its unevolved form, Teddiursa, it has a round, ball-shaped tail.

Unlike its unevolved form, Teddiursa, Ursaring is a forager, although it is known to eat meat (including other Pokémon) when hungry. Ursaring also differs from Teddiursa in that while its unevolved form requires periodic supplements of food during the winter (for which it stores nuts and berries), Ursaring can sleep through an entire winter without food.

Ursaring is also an accomplished digger, and it often digs for potatoes, truffles, or other such vegetables to eat. Although it is a digger, it does not naturally sleep in caves.

Ursaring's sense of smell is among the most developed of all Pokémon; it can detect subtle differences in scents. For this reason, Ursaring is sometimes used by police in the Pokémon universe, both as a strong enforcer, and as an explosive-sniffing Pokémon. If criminals are hiding in trees, it can use its claws to cut down the tree.

In the Pokémon Diamond and Pokémon Pearl games, the fur on the shoulders of male Ursaring stands up where on female Ursaring it remains down.

In the movie Pokémon 4Ever, Ursaring is one of the Pokémon which guides Ash and company to the injured Celebi.

A forest full of angry Ursaring appeared in the anime episode "Forest Grumps."

An Ursaring was captured by Paul in the episode called "Different Strokes for Different Blokes" and currently has it after seeing how strong it is.

In the Pokémon Special manga, Silver catches an Ursaring in Volume 8, using it extensively to thwart the plans of Team Rocket. 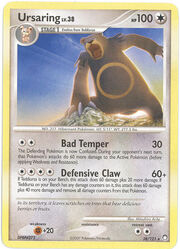 Ursaring, as a stage 1 colorless Pokémon, has appeared in the following sets: