Vaporeon (シャワーズ, Shawāzu, Showers in original Japanese language versions) are one of the 493 fictional species of Pokémon creatures from the multi-billion-dollar Pokémon media franchise—a collection of video games, anime, manga, books, trading cards, and other media created by Satoshi Tajiri.

Vaporeon's name is derived from the word vapor, the steam produced by boiling water. The -eon suffix is common to, though not exclusively, shared by all names of Eevee evolutions. Its Japanese name refers to the word shower, as in a sprinkling of rain or water.

Vaporeon is a quadrupedal mammal that shares characteristics of cats, dogs and aquatic creatures. It is roughly the same size as the gray wolf. Vaporeon has smooth turquoise skin, fin-like ears on the sides and a fin on top of its head, a weblike collar around its neck, a long, mermaid/merman-like tail backed with ridges, and fins on its head and the end of its tail. Vaporeon also has gills that allow it to breathe below water, in addition to its above-water lungs. Of all the different Eevee evolutions by elemental stones, Vaporeon is known to change the most. Vaporeon's cells are similar in structure to water molecules, and this allows it to have a unique control over the water around it. It is also able to actually transform itself into liquid as a form of camouflage. This ability also gives the Pokémon extremely high defensive capabilities as physical attacks have almost no effect on its flexible liquid form. When its fins begin to vibrate, it is a sign that rain will come within a few hours. Vaporeon's preferred habitat is the peaceful coast of a lake, where it is sometimes mistaken for a mermaid or a merman.

Vaporeon cannot be caught in any of the Pokémon games. It must be evolved from Eevee with a Water Stone. Therefore Vaporeon's availability depends directly on the availability of Eevee.

Vaporeon's high Special Attack make it ideal for Water-type attacks, and its high HP gives it an unusual amount of stamina, allowing it to survive even Electric-type attacks. This makes it a popular choice among Trainers looking for a Water-type for their team. Vaporeon can also learn Acid Armor, which highly increases its defense, making it an even more attractive choice.

Vaporeon's first appearance in the Pokémon anime was in Episode 40, The Battling Eevee Brothers!. In this episode, Ash's party comes upon a family of four brothers who all have Eevee evolutions. The three older brothers have Flareon, Jolteon, and Vaporeon, and they are pressuring their youngest brother Mikey to evolve his Eevee, too. What they fail to notice is that he doesn't want to. When Team Rocket steals all of the Pokémon, however, Mikey proves that his Eevee doesn't need evolving by beating Team Rocket when his brothers' Pokémon couldn't.

In Episode 56, The Ultimate Test!, Ash and his friends participate in the Pokémon League Admission Exam, part of which is battling using random Pokémon. Ash ends up using a Meowth while battling a Vaporeon, and he loses. (As a result, he gets scratched by Team Rocket's Meowth for "treating a Meowth so badly!")

In Episode 185, Trouble's Brewing!, a family of sisters in Ecruteak City, like the Eevee Brothers in Episode 40, are trainers of most of the different Eevee evolutions, including Eevee, Vaporeon, Jolteon, Flareon, and Umbreon. Vaporeon helps in fighting off Team Rocket, and later battles and wins against Misty's Poliwhirl. These same Pokémon reappear, with Eevee having since evolved into Espeon, in Episode 228, Espeon Not Included!, when Team Rocket kidnaps all of them. The Pokémon end up being rescued by Ash's party with help from the Espeon and its trainer.

Vaporeon appears in the Battle Frontier Episode "An Olden Pond!", where a girl named Tiffani owns a pond with her grandmother who owns a Vaporeon.

Vaporeon also appears in Pokémon: The First Movie as one of the Pokémon kidnapped and cloned by Mewtwo. There was also a cameo appearance of Vaporeon is in Pokémon Heroes where it got water from a pump that attracted Pikachu.

Red temporarily controls a Vaporeon, which is actually his Eevee switching between its evolved forms. 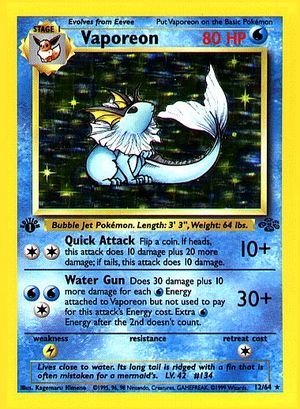 There are currently fourteen Vaporeon cards available outside of Japan:

Vaporeon's consistency in types has led to it always having the same weakness: Lightning-type Pokémon. In fact, the only set in which Vaporeon's type is not the same as in other sets is EX Delta Species, in which Vaporeon is a Delta Species Pokémon and so has Metal as a secondary type. As it is also a very agile Pokémon, its Retreat Cost is always one. It also always has 60, 70 or 80 Hit Points, and the only Vaporeon card with more is Vaporeon ex (pictured right), which has 120 HP.