Vendetta Online (VO) is a twitch-based, science fiction massively multiplayer online role-playing game (MMORPG) developed by Guild Software for the Microsoft Windows, Mac OS X, and Linux operating systems. It uses the WGAF game engine, a fully realtime flight model and combat system developed in-house that brings the intensity and immersion of FPS-style PvP and PvNPC battle action, set against the backdrop of a massively multi-player universe. Vendetta Online shipped as a commercial MMORPG on November 1, 2004, with a subscription-based business model. It is updated regularly (usually every other week) with new content and bugfixes. While Vendetta Online has already shipped, the game is still considered to be in beta status by both its users and its developers, and many defining qualities are still only in the stages of early planning. This is not to say the game is lacking in features, there is already enough there to keep a player occupied for many months, but the 'beta' status is used by the developers to allow the game to develop dynamically with player interaction. Thus the Vendetta Online universe is evolved by its players.

The PCC (Player Contribution Corps) is a hand-picked group that creates content for the game (mainly missions.) These players use an in-house developed browser-based mission editor and submit their content to a publicly accessible test server. There the mission can be tested by anyone, and commented on. The mission can then be resubmitted, based on new suggestions. Furthermore, the developers are very responsive to general suggestions, some of which are implemented.

In Vendetta Online, there are three playable nations and many minor NPC factions. The nations are the Itani Nation, the Serco Dominion and the Union of Independent Territories (usually referred to as the UIT). The Itani are reputed for their science and manoeuvrable ships, the Serco for their warrior nature and armored ships, and the UIT for their trading abilities and neutrality. 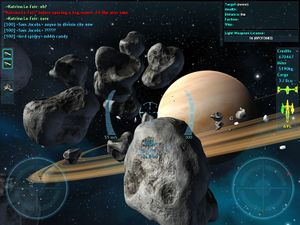 Vendetta Online has a long backstory, which details the fate of humanity from 2140 to 4432.[1] It was written by the lead game developer, John Bergman.

In June 2009, the game acquired the ability for several players to serve as crew together on a single ship.[2]

Gamespot rated Vendetta as "good", highlighting the novel twitch-based space combat, and a successful implementation of multi-player space trading and combat gameplay. However, it was felt that the limited content did not justify the subscription value, and the ship designs were deemed to be uninspiring.[3]