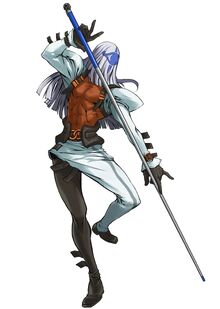 Venom is a character in the Guilty Gear series of fighting games who first appears in Guilty Gear X: By Your Side. Like many other characters in the series, Venom uses a very unusual weapon, a pool cue. Many of his special attacks involve the use of the stick and billiard balls. Venom is the only character officially stated as being homosexual (care of the latest Guilty Gear drama CD "Knight of Knives" released at the end of 2004), although this was heavily implied throughout his story sequences in the games and in the Guilty Gear novel "The Butterfly and Its Gale".