Venomoth (モルフォン, Morufon, Morphon in original Japanese language versions) are one of the 493 fictional species of Pokémon creatures from the multi-billion-dollar Pokémon media franchise – a collection of video games, anime, manga, books, trading cards and other media created by Satoshi Tajiri.

Venomoth is a Poison/Bug-type moth Pokémon which evolves from Venonat.

Venomoth's name comes from the words venom and moth, referring to its poisonous fangs and wing scales and the real species it is based on. The name Venomoth refers to the species as a whole, as well as to individual specimens in the games, anime, manga, trading cards, and other media.

Venomoth looks quite a lot like an oversized moth. It has a pair of pale violet wings shaped like a butterfly's, a purple body and a violet abdomen. It has two glassy blue eyes. It also has very small legs and mandibles.

Venomoth is a nocturnal Pokémon. It is an insectivore - it eats bug pokémon, preferring most those that fly around streetlights transfixed by their luminoscity, thus making easy prey. Venomoth are often hunted by Zubat, Golbat, and Crobat. Yanma are a favourite of Venomoth. When Yanma evolve to Yanmega, they fight back with their Air Slash attack.

Venomoth's main means of attack and defense against larger foes are the powdery scales covering its wings. These scales are hard to remove, and they contain highly toxic dust which is released on contact with the wings or whenever Venomoth flaps them. If Venomoth beats its wings fast and violently enough, it can let loose large clouds of powder all around it, making contact with it inevitable.

The exact effects of Venomoth's powder depends on its color, which corresponds with the color of the scales it originated from: dark colored powder is poisonous, while lighter colored powder will induce paralysis. Its name comes from venom and moth.

In Pokémon Gold and Silver Venomoth is available in Routes 24 and 25. In Pokémon Crystal Venomoth is relocated to Routes 9, 10, 13, 14, 15, 43. In Pokémon FireRed and LeafGreen, Venomoth is in the Safari Zone and the Berry Forest.

It is also obtained by evolving Venonat at level 31.

Venomoth first appeared in episode #32 (The Ninja Poké Showdown), where it was used by Koga, the Gym Leader of Fuchsia City. It evolved from Venonat as soon as it emerged from its Poké Ball. Koga's sister Aya also has a Venomoth, seen in episode #179 (Ariados Amigos!) Venomoth has made additional appearances as cameos in the Bug Catching Contest and in Pokémon Contests. It also was in The Ole' Bearate and Switch,As a Pokémon used by a Team Rocket agent as well as in a battle against Ash during the Hoen league where it used attack combinations of stun spore and disable.

In Pokemon Special: Venomoth debuts in The Secret of Kangaskhan in the Red, Green & Blue where Green defeats a wild one but don't catches it because he already has one. This was the first Pokémon to be shown with a Pokédex entry.

Sabrina is also seen to have a Venomoth.

Pokédex entry: The dust-like scales covering its wings are color coded to indicate the kinds of poison it has. It has a short life span, and appears to be the evolved form of a Venomat. 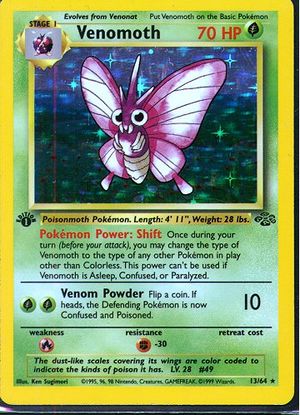 Venomoth has appeared in Jungle, Gym Heroes (as Sabrina's Venomoth), Neo Destiny (as Light Venomoth), Pokémon *VS (as Janine's Venomoth, a basic Pokémon), Skyridge, and EX Firered and Leafgreen..