Venonat (コンパン, Konpan, Kongpang in original Japanese language versions) are one of the fictional species of Pokémon creatures from the Pokémon media franchise—a collection of video games, anime, manga, books, trading cards, and other media created by Satoshi Tajiri. The purpose of Venonat in the games, anime, and manga, as with all other Pokémon, is to battle both wild Pokémon—untamed creatures that characters encounter while embarking on various adventures— and tamed Pokémon creatures owned by Pokémon trainers.

The name "Venonat" is a combination of venom and gnat, a small insect. Its Japanese name comes from the English word compound eyes, describing its appearance, as well as konchū (昆虫, insect, or bug), and possibly denpatanchiki (電波探知機, radar).

Venonat is a moderately large insect-like creature resembling a ball of purple fur with large red bee-eyes (or fly eyes as they look similar), a pair of pincers substituting for a mouth, rudimentary non-insectoid hands and feet, and a pair of grey antennae. Its fuzzy-but-stiff exterior seems to have evolved on Venonat over the ages which, along with the poison that consistently coats the whole body, serves to protect Venonat from being targeted as prey.

Venonat can be seen as the larval and pupal form of what it eventually becomes—the moth Pokémon Venomoth—but it already demonstrates characteristics of moths. It is a nocturnal insectivore in spite of being an insect itself. Since these bug Pokémon only appear at night, Venonat lives an arboreal lifestyle, sleeping in a hole in a tree until night falls, after which it will scavenge for food at the base of its tree. Venonat are always in danger of being eaten by a Carnivine.

Venonat’s distinctive eyes are its most notable feature. They are structured like the eyes of a bee, as in, its eyes are clusters of many, many tiny eyes. This is apparent to onlookers when observing Venonat in an especially bright setting. These optic arrays, allow the Pokémon to live and forage in darkness and to spot even the most minuscule of prey. Like a moth, Venonat is instinctively attracted to bright lights during the night-time, so it is often seen around city lamp posts. The most startling function of Venonat’s eyes are apparent in a trainer-directed Pokémon battle; it can shoot literal laser beams from its eyes at the opponent. (Psybeam attack: fires a psychic beam that may cause confusion)

Venonat are featured in the Pokémon video game series. Originally in Japanese, but later translated into other languages, the games have sold over 143 million copies worldwide.[1]

Venonat is found variously in the wild in the Kanto region between the various versions of the handheld Pokémon games. Venonat can be found in the Safari Zone, and also at Three Island in Pokémon FireRed & LeafGreen.

By Basic Pokémon standards, Venonat has quite well-rounded statistics, including a decent HP stat, along with early access to the Psychic-type move Confusion, making it moderately easy to train while awaiting evolution into Venomoth (at level 31), where it may be used for competitive play. In addition, its Compoundeyes ability increases its accuracy which helps it use its rather wide array of status-inducing moves, which include Supersonic, Poison Powder, and Stun Spore. It can also learn Signal Beam as an "Egg move" (Or inherited move) by breeding; Signal Beam is one of the most powerful Bug attacks, paling only in comparison to Megahorn.

The Pokémon anime series and films are a meta-series of adventures separate from the canon that most of the Pokémon video games (excepting Pokémon Yellow) follow. The anime features the quest of Ash Ketchum, a young Pokémon trainer, as he and several other companions travel around the world with their Pokémon partners.

Venonat appear in many episodes of the Pokémon anime, however, many of these appearances are cameos. Among notable appearances, the Gym Leader Koga has a Venonat, which evolves into a Venomoth. Koga's sister, Aya, also has a Venonat. Later in the series, Tracey Sketchit owns a Venonat. 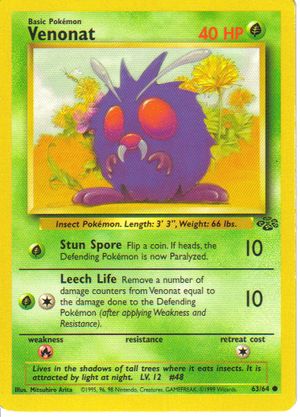