The name Victreebel may be a combination of "victory" and "bell." The "bell" refers to the shape of the Pokémon's head, similarly to its pre-evolved forms Bellsprout and Weepinbell. It is also worth noting that it contains the word "tree" within it, as Victreebel is a grass-type Pokémon. It may also be derived from "big tree bell". If its name does come from "victory bell," the name may be a reference to the Liberty Bell. It may be of interest to know that its Japanese name "Utsubot" is probably inspired by the word "utsubokazura", the Japanese word for the pitcher plant. It is speculated that the full spelling should be "Victreebell" in keeping with the names of its pre-evolved forms. However, the limit of letters to a Pokémon species' name is 10, as dictated by the code to any Pokémon game, so one "l" was discarded (compare with Feraligatr).

Victreebel looks like an elongated Weepinbell; however, its mouth is now at the top of its body as opposed to the bottom. Its mouth now has two small fangs, and a leaf covering it so that it can open and shut. Its leaf, as mentioned above, grows from this vine. The design that Victreebel is based on is very similar to the carnivorous Nepenthes pitcher plants.

Victreebel is said to live in huge colonies deep in the jungle, although nobody has ever returned from these places to confirm. It lulls its prey with a sweet, honey-like scent, and also the vine on its head (which waves as if it were an animal) before digesting it with powerful stomach acids that can even dissolve bone. Normally, its prey are bugs, but it has been known to attack and consume small animals.

Victreebel must be evolved from a Weepinbell by using a Leaf Stone. It cannot be obtained in Pokémon Red through any other method than trading with someone that own Pokémon Blue.

Victreebel can be compared to Venusaur in both movepool and statistics, in which case Victreebel exchanges defense and special defense stats for a higher attack stat, which would work nicely with its Sludge Bomb attack that can be taught by Technical Machine, just as its equally high special attack would go with its Razor Leaf move, and Solarbeam as well. In Pokémon FireRed and LeafGreen, Victreebel also has access to the Stockpile/Spit Up/Swallow set of moves. However, Victreebel is also somewhat inferior to Venusaur in terms of speed, which taken together with its lower defenses make Victreebel a fair bit less desirable than Venusaur, especially considering that Pokémon’s access to the very powerful Frenzy Plant move.

Victreebel does have the Chlorophyll ability, however, which doubles its speed in sunlight, so it appears in competitive play as a Pokémon that operates with a team based on the Sunny Day move (or Groudon’s Drought). If brought out under the influence of sunlight, Victreebel proves to be a swift and powerful Grass/Poison-type force that can launch repeated Solarbeam (which omits its charge step in sunlight) and Sludge Bomb attacks that are strengthened by both Victreebel’s high offensive statistics and the STAB that result from Victreebel’s types.

A Victreebel can also be found in the Nintendo 64 game Pokémon Snap in the Cave Course. A lone Weepinbell will be circling around a small puddle of water, and if it is knocked into the pond by Pokémon food or a Pester Ball, it will evolve into a Victreebel, which can then be photographed.

James, of Team Rocket, had a Victreebel. It was evolved from his Weepinbell while in a daycare center (run by Butch and Cassidy). Far from being loyal to him, however, it usually tried to eat him as soon as it emerged from its Poké ball (this tradition of James's grass pokémon hurting him was continued by James' Cacnea in the "advanced generation" of the anime,and Carnivine in Diamond and Pearl). It was known for emitting a high-pitched shriek when it emerged from its ball.

In "Here's Lookin' at you Elekid", James traded his Victreebel for a Weepinbell from the Magikarp Salesman that he claimed could attract other Pokémon with its scent. But soon after that one evolved into Victreebel, it immediately tried to devour Jessie. In a rage, Jessie threw it away, much to James' horror. At the same time, James' first Victreebel tried to eat the Magikarp Salesman, so he threw it away as well. The two Victreebel crashed into each other in mid-air, fell in love, and left James.

Victreebel is voiced by Rikako Aikawa in the original Japanese version of the anime.

Crystal from Pokémon Special manages to catch a Victreebel in her quest to fill the Pokédex. During the fight, Elm's Chikorita comes looking for Crystal, prompting Victreebel to sneakily use Chikorita as a living shield to defend itself from Arcanine's Fire-type attacks. 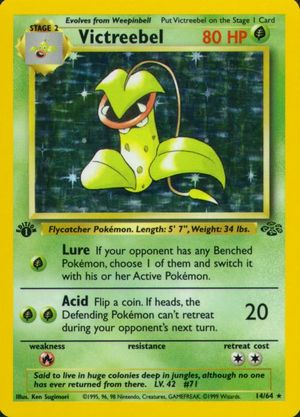 Victreebel has a minorly prolific career in the card game. Its appearances are as follows: