Virtual Pool 3, often referred to as VP3, is a 3D, first-person sports simulation video game, developed and released for the PC and PlayStation by Celeris. It is the most recent game for the PC in the franchise of "Virtual Pool" games and it is widely respected by fans as the most accurate available computer simulation of cue sports.

"You can't find a pool sim that looks and plays as much like the real thing as Virtual Pool 3 does. If your real-life play doesn't show any advances after you spend some time with this outstanding pool simulation, you're left with only two possibilities - you're so good that there's no way you can get better, or you don't have any arms." — GameSpot[1]

The Virtual Pool series made its debut in December 1996 with the release of Virtual Pool. From there, Interplay went on to release Virtual Pool 2 in November 1997, adding a wealth of improvements including enhanced physics modelling and a handful of new game types. Virtual Pool Hall soon followed in December 1999, bringing with it the introduction of snooker to the series. It wasn't a perfect break though, as Virtual Pool Hall suffered from poor opponent AI and a lack of a pool hall atmosphere, ironic considering its name. With Virtual Pool 3 however, the fourth installment in the series, Celeris is lurking closer and closer to the perfect game of pool.[2] Initially, Virtual Pool 3 was released as a retail boxed version endorsed by Jeanette Lee, the successful Korean-American professional pool player. Currently the latest version is available on the Celeris site as a download and is still supported via downloadable patches.[3]

The game is an active Internet pastime for many amateur billiards enthusiasts all over the world (most notably from the USA and Europe), with a small but dedicated following, many of whom have been playing the game for years. 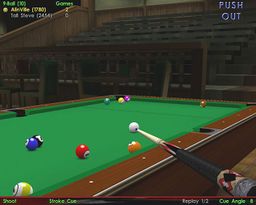 The game can be played in single-player mode against the computer (Career Mode, Tournament or Quick Play), or against other human opponents on the Internet or locally through a LAN.

The game features eight billiard venues the player can choose from, which include six pool tables, a snooker table, and a carom table for cushion caroms or three-cushion billiards. There are three preset table configurations available for all games (Championship, Professional or Amateur), but any table can be customized for roll speed and pocket dimensions.

Twenty-one variations are featured in the game, and while most players stick to pool favorites such as nine-ball, eight-ball and straight pool, as well as snooker, the inclusion of less common variations such as cowboy pool, honolulu and bowliards may be of interest to some, especially since finding real-life players of them can be difficult.

The games featured in Virtual Pool 3 are as it follows:

Players use the GameSpy Arcade client to access the game's main lobby and then create or join virtual rooms where they can participate in online play.

The Virtual International Players Ladder (VIPLadder) is a perpetual league for virtual pool players around the world.[4] Players compete in matches to earn points from other VIP Ladder players. As players earn points, they move up the ladder.

Besides other normal leagues ending with playoffs[5] (like the Eight-ball Pub League[6]), there are several regular weekly online tournaments that every player can attend. Each tournament usually takes a few hours, but some more prestigious tournaments such as the Virtual 9 Ball World Championships and the Virtual Snooker World Championships can take several days or weeks to complete.[7]

Virtual Pool 3 was mostly very well received by critics, with an average score of 85% at Game Rankings, which makes it the highest rated billiards game on the PC platform, as of 2007.[25]

Virtual Pool 3 Gold was projected to be the long-expected next generation of the Virtual Pool series. There is no official release date for PC yet: "Progress has been slow lately because of other commitments. We are trying to get a console deal going which would really help with the VP3 Gold's pace", said Celeris developer Steve Chaplin. "We are currently involved in talks for XBox 360, PS3 and Linux versions. I thought we would be doing a Wii version this year (2007) and that would push VP3Gold but it never happened. That is why no information has been forthcoming, but we have not given up on doing this project, just need other related work to make it happen." However, the VP3 Gold project has been renamed to Virtual Pool 4, which is now officially under development.[26]