On 22 July an English version was released, containing also a Dutch beta version. On 21 February 2009 the authors released a final update of the database to season 2008/2009. Information: http://www.vm.e-siatka.pl/viewtopic.php?p=40057#40057. Then authors released Volleyball Manager 2009 and 2010 with many new options that enable for the first time play in manager career mode and contains extended players' statistics from player's league competitions. For the first time the game contains a fully translated Italian edition. Information: http://forum.e-siatka.pl/viewtopic.php?f=55&p=48861#p48861. The game enables play with 854 clubs in 77 league competitions in 37 countries over five continents and to lead one of 96 national teams. The game contains more than 11,000 volleyball players.

Volleyball Manager 2010 which contains a game engine in 2D format and a scouting system that will allow player to find new volleyball players for his team.

Next ersion Volleyball Manager 2012 was released on 29 April 2012 and contains updated squads, optimized programme code and new functions like coaches and their assistants of every team and new way of growing players' skills.

On 22 July 2008 a fully translated English version was released, also containing a Dutch beta version. A play-off phase of all-league competition, new elements of match tactics, and a pre-match briefing were added. A list of changes in the new version is given in: List of changes.
On 12 October 2008 a squad update to season 2008/2009 was released.
On 1 November 2009 a new version with an Italian language version, manager career mode, and extended players' statistics from player's league competition was released. 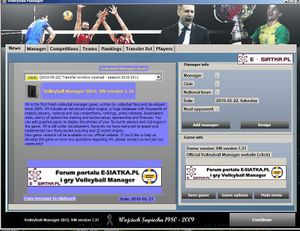